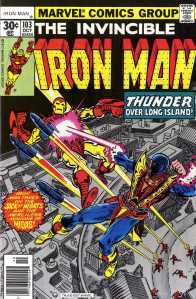 Synopsis: Iron Man 103 was written by  Bill Mantlo and pencilled by George Tuska with inks by Mike Esposito. It opens with Harry Key and Krissy Longfellow trying to escape Jasper Sitwell, Agent of S.H.I.E.L.D.  They evade Jasper, but are captured by Ancient Greece obsessed villain Midas. 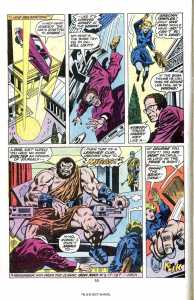 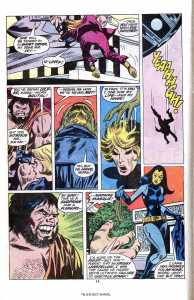 Then we learn that Harry Key, who expected to hand over a spare suit of Iron Man armour to Midas, only has a cheap fabric knock off, and his co-conspirator Krissy Longfellow (Secretary to Tony ‘Iron Man’ Stark) is to Harry and Midas’ surprise actually Madam Masque. Midas bears no ill will to Madam Masque, but for Harry’s failure he is thrown out of Midas’ flying fortress to be found by Sitwell. Back in France, the recent legal troubles facing Tony Stark have been dealt with and his name is clear and in his Iron Man identity, he is trying to make his way back to New York by commerical plane.

He finally manages to get back, only to discover that Midas has bought out much of the Stark Industries board and has taken over the company. As Stark Security try to keep him away, new super hero Jack of Hearts flies in to try and keep Iron Man man from hurting anyone innocent. This is a Marvel comic, so we know how this goes.

The two battle, both cutting into eachother, before finding themselves in front of Midas, who lets him know who is now in charge. He also learns who Krissy Longfellow really is. Iron Man appears crushed, but Midas points out that it’s Stark who’s lost everything, but Iron Man is now fired. Jack of Hearts points out that Stark will know what to do. He doesn’t but he carries Madam Masque off and Jack of Hearts also takes off. The whole thing ends with Jasper Sitwell finding out that Midas now owns Stark International and somewhere else, an old flame of Tony’s Marianne Rodgers is released from the sanitorium. 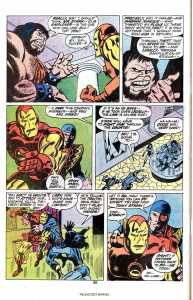 Notes: I didn’t really enjoy this one and I can’t tell if Midas is supposed to be as weird looking as he is, but it does take you out of the story. This feels so much more like a silver age comic that it should. The art and story progression is just off for the bronze age. It lacks the fun and bonkers logic of the last Iron Man issue I read and without that, it’s a bit of a damp squib. That said, the bit with Air France is quite fun.

Relevance: None that I can think of.

Next time: Hopefully a better comic