Synopsis: Amazing Spider-Man 176 was written by Len Wein with pencils by Ross Andru and opens with Spider-Man dropping off J.Jonah Jameson back at his office at the Daily Bugle. After another argument between the two, Spider-Man goes home, ditches his costume and as Peter Parker, gets some well needed sleep.

Waking up, Peter realises many of his recent injuries, including a bullet wound have healed up, leaving him quite jolly. He decides to spread this goodwill, first with his land-lady and then with his aunt May, who is protesting for senior citizen rights at town hall. She gets into a bit of a shoving match with a policeman, who’s there to provide security and May falls onto the steps just as Peter arrives. Peter leaps to May and throws the police officer back towards his partner, neither knowing or caring if anyone notices how strong he is. He then goes with her in the ambulance the police officer has called and is there when Mary Jane arrives. 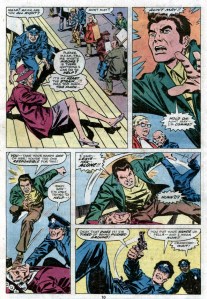 After assuring himself that May is alright and passing on some afternoon delight with Mary Jane, Peter goes to check on Dr Hamilton, who is treating his friend Harry Osborn. What he finds is another police officer, checking the crime scene, who when Peter asks questions tries to bring him in. Peter escapes and decides to head to Harry Osborn’s flat to find out what is happening.

At the apartment in question, Eugene ‘Flash’ Thompson is home after grocery shopping and is caught by the Green Goblin, who Flash realises is Harry, wearing his father’s costume. Peter, as Spider-Man, slips inside the flat and a fight breaks out. Harry is enraged and battles Spider-Man to a standstill, mainly because as his best friend, Spider-Man doesn’t want to hurt his friend, just get him some professional help. To stop Spider-Man from talking about helping him, Harry throws Flash Thompson out of the window.

Relevance: The whole throwing the friends and Green Goblin attacking Spider-Man indirectly was first used in Amazing Spider-Man 121-122, a story I think we all know, but it has been re-visited and homage’d so many times since and this was one of the first stories to use that.

Notes: I really liked this issue, Len Wein is a lesser known Spidey writer and the excellent pencils by Ross Andru are almost always overlooked in place of Gil Kane (Who I feel is not as good as Andru on Spider-Man) and John Romita, who wrote the book on college age Spider-Man on an number of levels. The story proceeds very well on a one and done level, but there is a great sense of this being part of an ongoing narrative, without that being a negative. The art is clear and moves great, the action is exciting and fun and the cliff-hanger for it’s time, works very effectively. One thing I did notice was that it clearly showed you that Peter is quite a d**k a lot of the time. While you always feel for him, a lot of how people react to him, is kinda his fault and he does tend to take the people in his life for granted. This is a relatable Spider-Man, not some perfect heroic figure, but just a guy trying to work it out for himself and like the rest of us, often getting it wrong.

On the subject of pre-80’s Spider-Man Andrew Leyland of Hey Kids Comics has done a solo podcast called Palace of Glittering delights and has just started a retrospective of Spider-Man. If you’re a fan of the Web head, it’s worth checking out.

Thats all for now from your friendly neighbourhood blogger.

Next Time: Less cost effective it maybe, but a hitman using giant Pinball certainly stands out in the market place.

Well that was a little worrying.