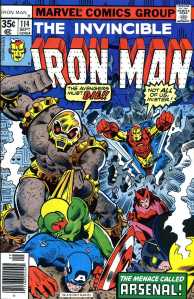 Synopsis: Iron Man 114 was written by Bill Mantlo with pencils by Keith Giffen and opens with Iron Man asking Yellowjacket to help an increasingly more unstable Unicorn. Unicorn (a long time Iron Man villain) has been sent by someone to attack Stark International, despite him being terminally ill and the best way to find out why is for Iron Man to help. Along with Yellowjacket in the mansion are the Vision, Beast and Wonder Man. Beast asks why they are doing all of this for free, despite already having Count Nefaria and the Eternity Man in long term care as well.

As the Avengers leave the room to allow the revitaliser to flood the room with radiation which should revive the Unicorn, the radiation would be harmful to anyone else and leave the machines to their work. They do, Unicorn wakes up and in his unstable state starts trashing the place. 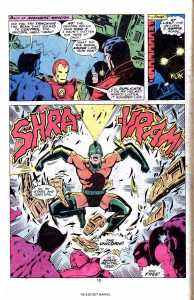 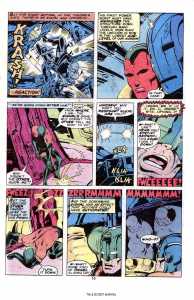 We get some subplot stuff, with someone spying on Stark International and with Whitney (Madame Masque) Frost moving in to Tony (Iron Man) Stark’s penthouse, but then we go right back to the Unicorn’s rampage.   He breaks into the main room of the mansion, where the team are talking about a signal that was controlling the unicorn and when Iron Man demonstrates the signal, the connection between Unicorn and the other, who was guiding him is restores and Unicorn attacks the Avengers. Thanks to a mis-judged head kick from the Beast, Unicorn blasts through to the sub-basement of the mansion, where the signal always wakes something else up, a large and at this point here to unknown robot who declares he is Arsenal. 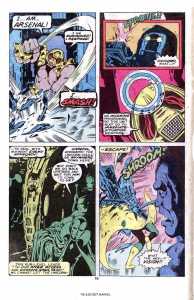 This robot just demolishes Unicorn, who lies motionless and when the Avengers investigate, Arsenal takes them on and to be honest, does very well for itself, even when Captain America and Scarlet Witch come back after dinner.  The battle becomes more fierce and Iron Man uses his armour to shield himself from the robot and is able to get the upper hand and chase it off, but that does leave the two questions, who sent Unicorn and where the hell did that robot come from? Arsenal was in a hidden compartment in a sub-basement of the Avengers’ Mansion, so who put it there? Iron Man declares his intent to find out.

Relevance: This issue leads into an Avengers annual later on, but not much more before that.

Notes: This is a bit more like it. This was a lot of fun. The interactions were fun and the dialogue for it’s time was really good. The Avengers having such a big role in this was a great thing and it felt more like an Avengers comic and a good Avengers comic. The using Unicorn to get information was secondary to getting him help, showing the heroic side of Iron Man. The characterisation of Beast was a bit off, but I love this iteration of the Beast, with all his banter and horn-dogging and I love the insanity of a robot in the basement. Huh? Yes, let me repeat that ROBOT IN THE BASEMENT. This is why I love comics, you can never guess where stuff is going to come from. This is fun and the Arsenal story comes back in Avengers Annual 9 in 1979 and for that reason alone, am glad I read it.

Next Time: Live from New York…..