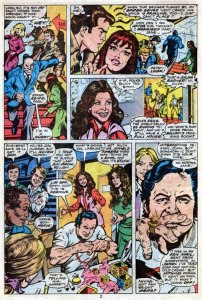 Synopsis: Marvel Team Up 74 was written by Chris Claremont, with Bob Hall and Marie Severin on art and opens with Peter (Spider-Man) Parker and his date Mary Jane Watson heading to a taping of Saturday Night Live, the legendary comedy show, which launched dozens of caree rs and did wonders for countless others. This is the 1978 vintage so the cast included Jane Curtain, Laraine Newman, Garrett Morris, Gilda Radner as well as legends Bill Murray, Dan Akroyd and John Belushi, who along with Lorne Michaels all appear in this comic. The guests are familiar Marvel celebrities Stan Lee (who prints actual Marvel Universe events in the Marvel Universe version of Marvel Comics) and professional side-kick turned folk singer Rick Jones.

The plot is wafer thin, a piece of advanced technology, in the form of a Japanese ring is sent to New York, this is to be picked up by mid level X-Men villain Silver Samurai. The problem is that the label on the package is smudged and it ends up in the hands of John Belushi, so the Silver Samurai decides to get a gang together and invade the studio  to get it back.  Spider-Man being in the audience is just one of those coincidence things. 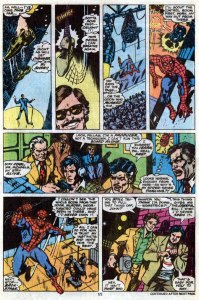 Spider-Man teams up with the cast to confuse, distract and ultimately defeat the gang before John Belushi in middle ages Japenese clothes battles against Silver Samurai and loses the ring, allowing the Samurai to teleport away, after vowing that the next battle with  Spider-Man will be the last.

Relevance: This is the definition of a one and done, rarely if ever referenced again.

Notes: This is 10lbs of crazy in a 5lb bag. The sitcom level plot seems like it comes from a comic from an earlier time, but yet somehow works. Bob Hall does all he can to meld the reality of the actors on SNL with Spider-Man’s world and does a great job, with clear and polished inks by Marie Severin. The Silver Samurai’s gang is the lowest of low-rent thugs, who are terrified of bumping into any of the several dozen New York based Superheroes, which ends up becoming part of the cast’s plan to stop these guys, with the phones out and the doors guarded. Dressed as Ms Marvel and a black Thor, these guys are portrayed so badly it adds to the sitcom theme.

This ends up being quite funny, with silliness abounding and a cameo by Statler and Waldorf, of Muppets fame complaining about Peter and Mary Jane not sitting down. I feel that this would’ve been a better comic if a more naturally funny writer had done this, Steve Gerber comes to mind perhaps, comedy is not one of Claremont’s strengths, but to be honest this comic is a lot of fun and one that level it works perfectly.