Synopsis: Micronauts 1 was by Bill Mantlo and Michael Golden, with an assist by Joe Rubenstein and opens with a prince and princess on the run from what was once their own guards.

Ok, maybe a bit of a history lesson, Micronauts originally were a Japanese toy by Takara in the 1970s called Microman. Mego toys bought the rights for US distribution and they became the Micronauts. Much like Transformers and GI:Joe, it was licensed as a comic by Marvel and here, we are. Half of the concepts in this comic came from the Micronauts toys and the other half from Bill Mantlo and Michael Golden. 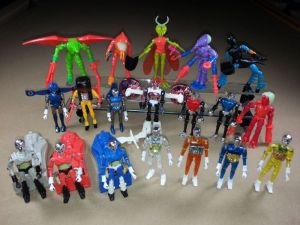 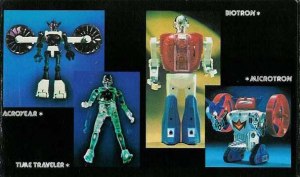 Now back to our story. The oddly named Dog Soldiers chase the royals and their loyal allies into the path of the airborne Acroyears who herd them to more Dog Soldiers who cut down all but Prince Argon and Princess Mari. They escape to shelter and a glowing being called the Time Traveller appears before them and Mari’s roboid Microtron, to everyone’s surprise. Before Mari can ask questions, Argon tells her to leave, following the time traveller to safety while he holds off the inevitable attack. She leaves as the army of the new ruler of Homeworld Baron Karza (think of Darth Vader as a centaur) who captures Argon and orders him taken to the body banks. An Acroyear called Shaitan questions this, but Karza declares that conquest is not always achieved by slaughter. 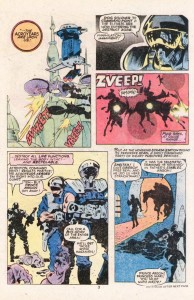 In the next chapter Commander Acturus Rann of the HMS Endeavour has returned from a 1,000 year round trip of known space. He has survived using suspended animation and being linked to the ship’s sensors. The maintenance was performed by Biotron, a roboid assigned to the ship, who awakes Rann when they arrive. They land, surrounded by what looks like an honour guard, only to find themselves shot at and Rann is arrested and placed in what are known as pleasure pits. Surrounded by alien beings, Rann only survives with the intervention of an Insectivorid and a huge Acroyear. It turns out that Homeworld invented faster than light travel and started warring against the other worlds, giving his entire journey a very Vance Astro ‘what was the point of that?’ feel to it. He then sees Princess Mari posing as a sophisticated marionette to get her close to the pits and keep her from being noticed by the Dog Soliders. 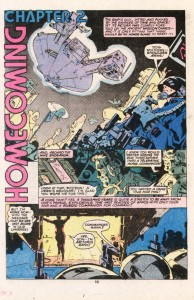 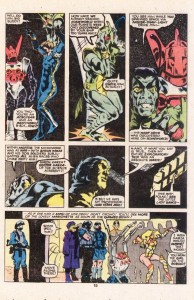 The next day, the prisoners of the pleasure pits are to be killed in gladiatorial games. At the stadium, the prisoners face a huge tank, under the watchful gaze of Karza, who is now two legged and sitting next to Shaitan as before, along with one of his Shadow Priests. By this point we now have a better view of Karza’s regime. The people have the chance to be remade in his body banks, offering a degree of immortality and great health, this is maintained by his Shadow Priests, with this offer, he got the people of Homeworld to turn on their monarchy, only to find themselves under this heel. To keep people in line, he has Dog Soldiers and has allied himself with Shaitain’s Acroyears to keep the people afraid, any X-factor that could destabilise his rule is thrown to the pleasure pits, or recycled in the Body Banks. Here though, is where some of it goes wrong. 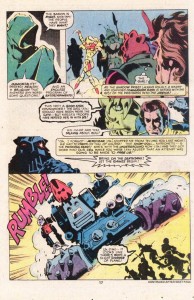 Princess Mari gets some weapons to the prisoners and they destroy the tank, as well as part of the stadium. The Acroyears are sent in and  the battle becomes more fierce, but the large Acroyear, an enemy of Shaitan,  the Insectivorid (we’ll just call him Bug from here on) and Arcturus Rann take the lead and meet up with Microtron and Mari who inform Rann that his parents were the first to fall to Karza, who was once Rann’s old teacher, only to become almost legendary figures, deified to become symbols of resistance. All the while, Baron Karza allows this, wanting to see where this unknown variable leads. 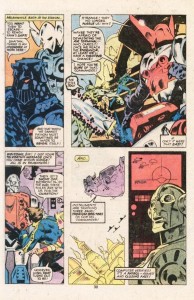 This quintet makes it to the Endeavour meeting with Biotron and the time traveller and they flee in the ship, heading for the edge of space. The time traveller vanishes and alone, outnumbered and on the run, these Micronauts head for the fringes of space.

Notes: This is a very familiar story in a lot of ways. There are tropes that can be found in Flash Gordon, Guardians of the Galaxy, Blakes 7, Star Wars, Lexx, the Starjammers and more that I haven’t mentioned. But despite that, this mix of story ideas works. The characters are simple, but that leads to you understanding them straight away. The ideas and concepts are interesting, the character designs are great and there’s a sense of epic running through it all.

It’s well pace, exciting and the characters are engaging enough, I wanted to read the next issue and I imagine I am not the only one and you can’t ask for better for a first issue.