Synopsis: Power Man & Iron Fist 47 was written by Mary Jo Duffy and pencilled by Trevor Von Eeden and opens at a fancy disco in New York, where Luke (Power Man) Cage is trying to sweet-talk his lady Harmony, whilst Danny (Iron Fist) Rand disco dances with his girlfriend Misty Knight. 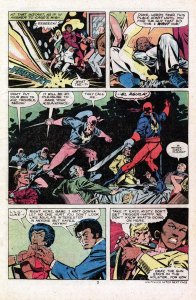 The disco is called Club 51, which is a clear reference to Studio 54, the infamous night club of the 1970’s and it’s also the place being visited by Chaucer Hayes, a known drug  deal and his entourage. 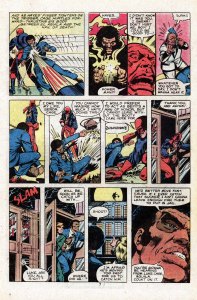 Once inside he is spotted by  a young man at the bar, who disappears and returns clad in a costume as El Aguila and then proceeds to rob him. Hayes’ driver pulls a shotgun and starts firing as does another of Hayes’ people, who is disarmed by Danny, while Luke takes the shotgun blasts to his chest, saving Aguila and terrifying Chaucer. El Aguila thanks Luke, but takes his booty and leave. Over the next few days El Aguila attacks several affluent ne’er-do-wells, including the offices of the Lindon Street Property Association, who luckily for them, have Heroes for Hire on retainer. Up until this point, the Heroes have had little success and less reason to find Aguila as most of te people are on the side of this Latino Robin Hood. The  Lindon Street Property Owners Association use their retainer to force Luke and Danny to find and bring in Aguila, despite their sympathy for him. 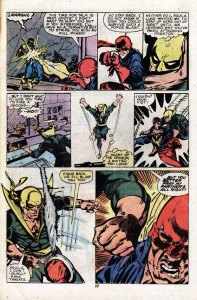 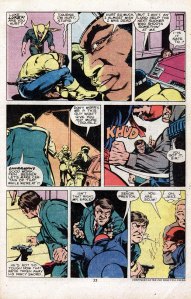 Aguila finds Preston first and tries to rob him,  only to be stopped by reluctant Power Man and Iron Fist. After a brief, but fierce fight, Aguila is restrained and Preston asks Danny and Luke to leave it to him, rather than call the police. Luke refuses and is shot several times for this, giving El Aguila the opportunity  the escape. When Preston demands that Luke and Danny get him back, the pair point out that it’s 5 o’clock and they’re punching out. Maybe a movie? 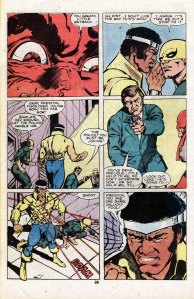 Notes: This was a fun issue, the story looking at when happens when the ‘for Hire’ part of their job description is stressed over the ‘Heroes’ thing, putting Luke and Danny on what they recognise is the wrong side. This fact grounds the story and spotlights the difference between these two and someone like Daredevil. The writing is matched by some great Trevor Von Eeden pencils, his detailed line work and expressive faces make the smaller moments more real and the fight at the end more visceral, the inks by Dan Green match perfectly, this is a beautiful book to look at.

Next Time: I pity the fools…. because it’s not going to end well for them.