Synopsis: Fantastic Four 216 was written by Bill Mantlo from a story Marv Wolfman and drawn by John Byrne and Pablo Marcos and opens with the Professor Randolph James a friend of Reed (Mr Fantastic) Richards, having been transformed into some kind of future-human wandering the streets of New York City looking for someone, or something above the panicking populace. This populace, seems to include John Byrne himself in the bottom right corner. There may be other creators here, Byrne had a habit of doing that. Randolph is looking for two men and when he finds them, remarks how below him they now are and transmogrifies them into gnats. This isn’t the first time that thugs have been dealt with by Randolph, who did the same to those that beat him near to death. A policeman tries to arrest him, but Randolph simply throws him back using generic eye beams. The Fantastic Four are at Randolph’s lab and there’s an exposition scene where we learn that Randolph built an evolutionary accelerator, but had no way to control it, when mugged and beaten to near death, he risked it and used the accelerator becoming the creature which now refers to itself as The Futurist, who even now is being watched by long time FF villain, Blastarr the living Bomburst. 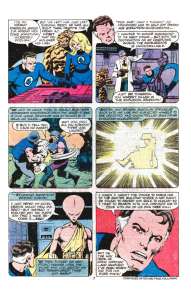 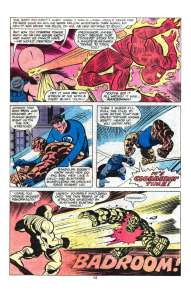 The FF are also looking for Blastarr, who has escaped the Negative Zone portal in the Baxter building. Both villains meet up and Blastarr convinces Futurist that the FF are just as big a threat to him as to Blastarr. Johnny (Human Torch) Storm arrives and attacks Blastarr, confirming the Futurist’s fears and Zaps Johnny which ilicits the “it’s Clobbering Time!” response from the Thing. Reed arrives as well and the battle with Blastarr continues. The Futurist takes the three down and takes Blastarr to the Baxter Building, to destroy the portal. 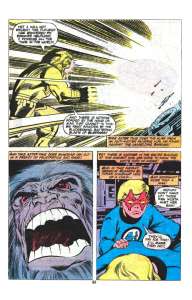 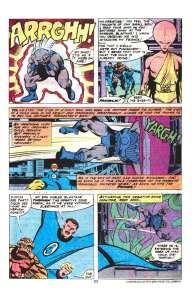 Sue and Franklin are there and the Futurist knocks Sue out. An angry Franklin glares at Blastarr, causing neurological pain under the curious gaze of the Futurist, throws Blastarr through the portal to the Negative Zone. The Futurist explains to the arriving Reed, Johnny and Ben that he cannot go back to being what he once was and intends to venture out to the stars. Sue recovers and hugs a relieved Franklin who is unaware of what he just did. Reed suggests to leave that just for now, but raises the question of how Blastarr got out of the Negative Zone in the first place. Out of their view is an oddly behaving H.E.R.B.I.E. robot.

Notes: I would love to tell you this was a facinating and original story, but it isn’t. The Blastarr teaming up with whoever shows up goes back to his earliest appearances and the person evolved to being above humanity is  a well worn trope and the less said about the powerful toddler the better, but that sort of misses the whole point here. This issue helps to sell one of the best elements of the Fantastic Four, it’s a family. Reed, usually the first person to analyse and idea to death, leaves testing his son, to let him stay innocent a little longer. The team fight for one another with the strength of familial love, even Ben, who is related to none here, but is always considered  family. The story ends with the family together. The high point for me is this is one of the earliest Fantastic Four comics I’ve read recently, by John Byrne, who would return to the title in the 80’s for a seminal run. This is an ok comic, but it has whetted my appetite for what is to come.