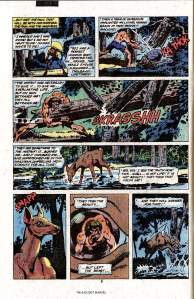 Captain America 244 was written by Roger McKenzie and pencilled by Don Perlin and opens with the mechnical creature called Adonis, stepping from the machine which formed him, a machine called the Master Matrix, which was stolen by Adonis’ people at Cameron Electronics to create an android body for him to transplant his brain into. The machine is used to make Life Model Decoys (LMDs) for S.H.I.E.L.D. and the human brain in robot body thing doesn’t go well and the the deformed and burning Adonis awakens and then starts rampaging.

Captain America holds his own against Adonis and protects the creature’s son, whom now is the owner of Cameron Electronics and as such responsible. Adonis flees to the river and appears to drown and  Cap, not sure what to do next, calls it a day. 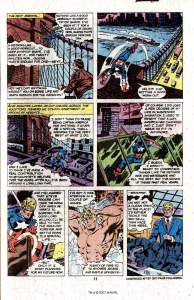 The next day, Cap is exercising on a local bridge before heading home, changing and avoiding the dishes before heading to an interview for an artist job. After winning the job through shared military service, Cap heads home and starts work. A few hours later, he hears that there is trouble nearby, which sounds like Adonis and Cap rushes to take down this monster. Adonis is now attacking anything or anyone with beauty and repayment for his current situation and when Cap offers to help, a flash of lightning causes Adonis to lash out at Cap. There is further battle and Adonis head for a the sewers, Cap follows after civilians have been aided and the two face off again at the only way out of the blocked sewers. Adonis ends up knocked onto a bulldozer and he panics, causing the bulldozer to head back towards the water, taking an arclight with it, causing an electrical fire when the bulldozer crashes, killing Adonis. Captain America laments that no one deserves to die like that, man or monster. 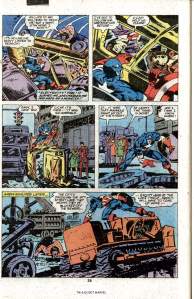 Notes: Wow, this was a bit boring. The art was a little stiff, which matched the personality deficient Captain America, who considering all his thought bubbles didn’t really have much in the way of character. This was a comic that could have starred any hero and with the stiff fight scenes and lack lustre plot, it just fails to come together as a satisfying story. I liked the scenes at Cap’s building and his trying for a job as Steve Rogers, but it’s not enough to raise this issue.

This isn’t how I wanted to open My Marvel Life 1980, but it’s the card I was dealt and there’s many more of this, consistently one of Marvel’s better decades.

Next Time: Spider-Man gets lucky, or unlucky