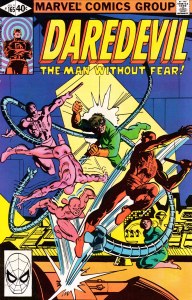 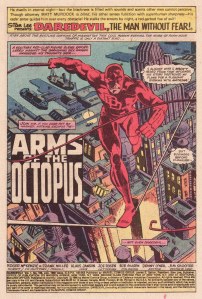 Daredevil 165 was written and drawn by Roger McKenzie and Frank Miller and opens with Matt (Daredevil) Murdock running a tight rope between buildings, heading towards Josie’s Bar. He is following a tip that leads into a confrontation with bar patrons, including Pike, who is involved with the transport of some stolen goods. Through all this fighting and some eavesdropping, he learns that there is involvement by Glenn Industries, who is currently run by Matt’s ex-girlfriend Heather Glenn. 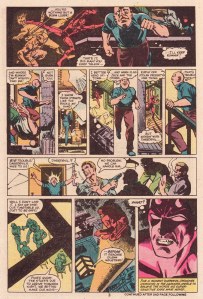 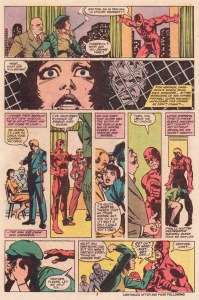 As Daredevil, Matt visits Heather’s office and raises his concerns, Heather who still blames Matt for her father’s death screams at him to go, but after he goes she calms down and starts looking into her company records. As she does, cylindrical metallic tentacles pull her away. At his brownstone, Matt and Natasha (Black Widow) Romanov are also looking at Glenn Industries’ records, when one of Heather’s ex-boyfriends calls Matt saying she’s missing, though not too concerned about it, leaving Matt with the idea of looking for her. Natasha offers to help, but is told in no uncertain terms that he has to do this alone and they can only ever really be friends now. 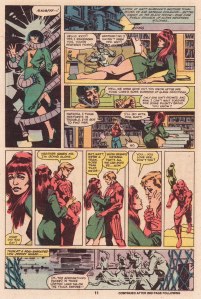 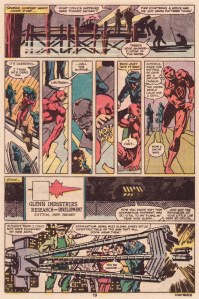 We then go to the bad guys who are doing stuff near some wharehouse when Daredevil arrives, there’s not much said about where that is or why Daredevil finds them so easily is glossed over, but he’s there and is handily beating the anonymous henchmen before he is soundly thrashed by none other than Otto (Doctor Octopus) Octavius. Doctor Octopus appears to drown Daredevil before leaving his body in the nearby river and returns to his work. 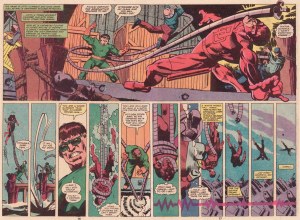 Of course Daredevil isn’t actually dead and quickly heads towards Glenn Industries to save Heather and for a rematch. At Glenn Industries, Doctor Octopus shows that the stolen goods are adamantium and he wants to cover his tentacles in it to make them indestructible. The board were ok with helping, but didn’t tell Heather, who is now a hostage. 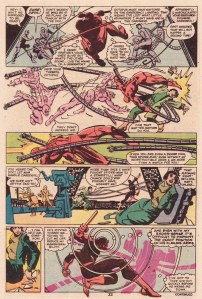 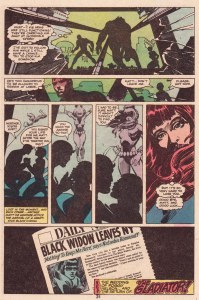 Daredevil arrives and kills the lights, the fight goes better for Daredevil, but it’s not that much in his favour until Heather gets free using some broken glass and scratches Doctor Octopus’ face. He lashes out and his metal arms snag on electrical wires, sending hundreds of volts through him. Daredevil shuts the power down before Doctor Octopus is killed and reconciles with Heather. Black Widow is outside and sees the whole thing, deciding that she’s lost Matt and without him, what’s she even in the city for? She announces to the newspaper that she’s leaving.

Notes: A solid issue of Daredevil, more of the elements of noir that Miller brought to Daredevil is there and you can tell that as a plotter, with help from Roger McKenzie, that Frank Miller is finding his feet. The Matt Murdock’s problems with women drama is a good side to the character and the wacky sidekickery of Foggy Nelson is a fun addition, but does sort of make Foggy too much of a joke and so he’s sidelined as a character. Black Widow is also near non-existent in character and her exit from the title is the best thing for her as character. Heather Glenn is also incoherently written and her change of heart towards Matt seems to come from nowhere. Miller would get better with this stuff, but the action, he already had that down. Matt gets owned by Doc Ock, pointing out that as street level as Spider-Man is, he is in a different weight-class to Daredevil and Spidey’s villains will require a bit more brains to beat, but Matt has brains and the story ends with victory. The bit with the newspaper made no sense, but to be honest it’s just expositional news really. On this whole it’s a decently paced action story with noir overtones and it’s very good as a Daredevil story if you’re not too familiar with Miller or Daredevil, but if you do check it out, know this, it will get better.

There’s a podcast by J. David Weter called Dave’s Daredevil Podcast which covers this character and this era and is worth checking out. Dave is a fun and engaging host and draws you in to whatever show he’s on.

The link is here.