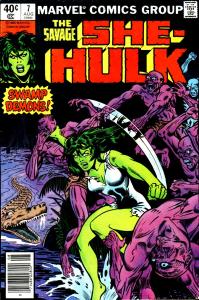 Synopsis: Savage She Hulk 7 was written by David Anthony Kraft, with art by Mike Vosburg and Chic Stone. It opens with Man-Thing supporting  character and all-round bad luck sufferer Richard Rory having a run of good luck, he wins $50,000 on a jackpot machine and then bets that on roulette, leaving him with $1,500,000. After getting a Rolls and driving to California, Richard comes across Jennifer Walters (in her She-Hulk form) being chased by police, who are still wanting her in questioning for murders during her first appearance. Richard directs the police away from the alleyway She-Hulk hides in and when he goes back to see her, she has returned to her Jennifer Walters form and simply avoids the whole green woman thing. Richard offers her a lift, she declines, being close to work, he takes that as a shutdown and Jennifer decides to go out with him that night. 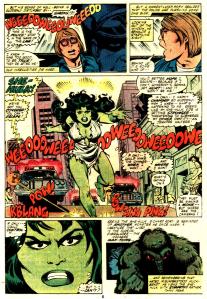 She changes at the office and the two drive around all night just talking. Richard tells his life story amd Jennifer listens and in a tender moment between them, she kisses him. After this date, Richard decides California isn’t for him and returns to Citrusville, Florida and buys the radio station that once fired him. He then plans to buy part of the swamp that the Man Thing lives in, so he is left alone. That doesn’t go too easily, given that the owner has disappeared. Meanwhile Jennifer decides to look at the land, after an alligator chases her, she turns into She-Hulk and throws it back, observed by reddish purpled skinned men. Richard finds Prof Slaughter, one of the last people to see the lands owner F A Schist and they talk about Schist and Slaughter trying to find the legendary fountain of youth, only to find these purple ogres and a spanish settlement in the swamp called La Hacienda. The purple men now attack She-Hulk and to protect the secret of their existence and they can’t stop her, until they use a potion to make her sleep. They carry her to La Hacienda and place her in a tube to be bathed in the waters and become part of that community, whether she wants to or not.

Notes: This was a solid story, that sort of peters out before it can get really interesting, the relationship between Jennifer and Richard is almost ignored, when these two finding each other is one of the best parts and the secret of the hidden Hacienda is put right at the end of the comic and feels rushed. This comic is all potential, but nothing in the way of payoff, it’s a shame, but we know there is a better She-Hulk coming.

Next Time: Epic space battles and maybe a ‘happy ending?’