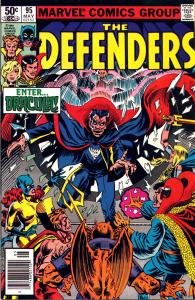 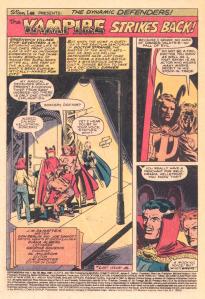 Defenders 95 was  written by J M DeMatteis with art by Don Perlin and Joe Sinnot and opens with the Defenders Doctor Stephen Strange, Valkyrie, Damien (Son of Satan) Hellstrom, Patsy (Hellcat) Walker and Isaac (The Gargoyle) Christians entering Doctor Strange’s home to find a miraculously healed Kyle (Nighthawk) Richmond, who finds out from when the sun rises that his return to health from paralysis is dependent on it being night time, much like his augmented strength. He is Nighthawk again, but only at night, during the day he will be paralysed once more. 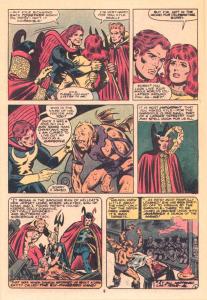 Dr Strange then retells the events of the past few issues, including a battle with the demonic six fingered hand and that the battle has left Patsy’s housekeeper Dolly near death. She blames Gargoyle for his part in the affair, but so does he. 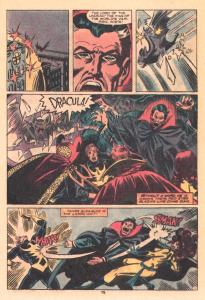 Daimon takes Patsy to her mother’s grave and using his supernatural power, shows her that her mother was quite happy to give her soul to the Avvarish, whom the Defenders recently battled. This meant that Dorothy Walker would have been happy to curse her daughter to get new life and health. Thus Patsy’s heart breaks once more. We also see that the Valkyrior have requested Valkyrie to return to them to lead them in battle, but she is unwilling, saying her place is with the Defenders. 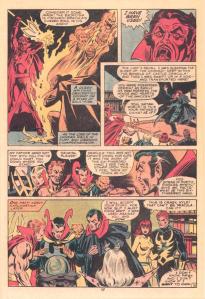 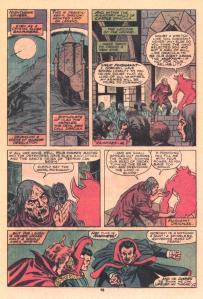 That night Doctor Strange meets with the rest of the team to discuss how Avarrish became so powerful when they are interrupted by Dracula, who breaks in and attacks the team. No, that is what I said, Dracula.

After a brief battle, Hellstrom stops the fight by exorcising the demon  possessing Dracula and they group learn of the machinations of the vampire Gordski, in service of the six fingered hand. Dracula agrees to a truce/team up and then it’s off to Transylvania. There is pitched battle with Gordski and his undead legion, until fully prepared Daimon Hellstrom moves the castle several hours into the future after warning Dracula. Several hours in the future is daytime and the vampires are killed and Nighthawk is again paralysed. When Hellcat asks why Dracula was warned, Hellstrom states that he wanted to know if there was any decency left in his own corrupted soul.

Notes: This was a story very much in the middle of itself, but that said it was a lot of fun. There was vampires, demons, gargoyles, sorcerors and choosers of the dead and that was just the good guys. Dracula felt like a bit of a tacked on guest star, but he works within the story well enough.

There were a lot of good character moments here, Nighthawk’s anguish, the pain of memory for Hellcat, Gargoyle’s attempts to make amends and others added a great depth to an otherwise by the numbers story.

When we get to Transylvania, the fights scenes get very 70’s and to be honest lack fluidity that other artists and inkers could produce, but the scene with the light over the castle is very well done. This issue wasn’t great, but it left me curious about this era of the Defenders and the characters I was less familiar with, which is the best thing a comic can give you, once you’re done with it.

Next Time: Back to Hells Kitchen