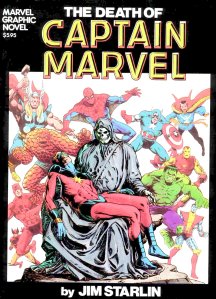 Death of Captain Marvel was written and drawn by Jim Starlin, it was the first of Marvel’s original graphic novels, a couple more of this year will pop up from time to time. It was a story so big, that one issue wouldn’t do it and Marvel was keen to get some of the growing direct market money. The story opens with Captain Marvel (born Mar-Vell of the Kree) dictating his life story onto a computer. He mentions that he was a captain in the Kree military and was sent to earth to spy on the planet and prevent it ever becoming a serious threat. He became convinced of Earth’s need to be free from Kree tyranny and planned to rebel. When his senior officer Yon-Rogg had his girlfriend Una killed, Mar-Vell deserted the Kree and vowed to once more defend Earth, who’s people had named him Captain Marvel.  He later became protector of the universe and fought more and more against evil, but was now living a sort of semi-retirement on Titan, the moon of Saturn, with the eternals who lived there. 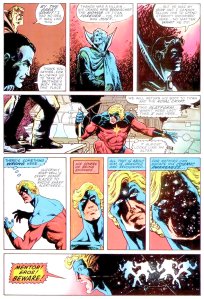 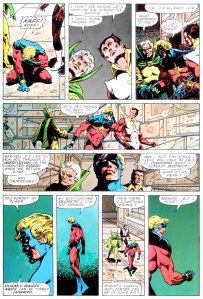 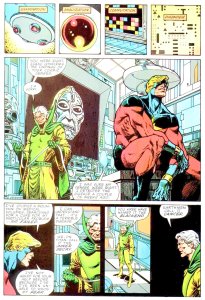 Captain Marvel visits the space ark of his old enemy, the mad Titan Thanos, along for the ride are Eros, Thanos’s brother and their father Mentor. Finding the petrified form of Thanos, they are attacked by Thanos’s worshippers and there’s a brief fight. As the fight ends, Mar Vell falls to the ground, coughing his guts up. Later on, back on Titan, Mentor confirms the diagnosis, a diagnosis that Mar Vell already knew. The eternals of Titan call it Inner Decay, the Kree call it the Blackend, we call it Cancer. It’s inoperable, since Mar Vell is not of Titan, or of Earth, the only reason he has lived so long is the nega-bands he wears on his wrists, even so, it’s terminal and he has perhaps three months to go. Mar Vell knows that it’s due to his battle with Nitro years earlier and his exposure to nerve gas. With all doubt removed, Mar Vell goes to tell Elysius , his girlfriend. There are no words shown, but what words would do? 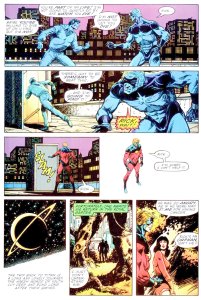 Mar Vell returns to his story, telling of his being bound to Rick Jones and their association with the Avengers, leading to the defeat and death of Thanos.  Mar Vell flies to Earth to see Rick, to see if the cancer spread through the symbiosis they had at the time of exposure. He then tells Rick the prognosis, Rick handles it badly.  Rick turns to the Avengers, who are unable to help, but that isn’t good enough for Rick. All over the universe, everyone reacts to the news of Mar Vell’s imminent death in their own way. Help is sent, cures are tried, but to no avail. Mar Vell asks that Eros take care of Elysius, when he has passed.

He grows more ill and is bed ridden when the visits begin, a who’s who of that era of Marvel comics, but the two of note is Rick Jones, who apologises and spends time with Mar Vell and General Zedrao of the Skrull armada. He is there to salute the Skrull’s greatest foe and give him the Skrull medal of valour. A reminder that while his people’s long hated enemies respect him, his own people have washed their hands of him. Mar Vell notes, he has the love of a good woman and many friends, medals from the Kree would mean nothing to him. That night, Captain Marvel slips into a coma, that he will never awake from. 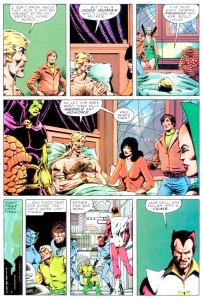 Before the end, Mar Vell is visited by Thanos, who offers him one last glorious battle, which is there to allow Mar Vell to accept his fate. Thanos convinces him to surrender to Death, who after stripping her of the illusion of beauty kisses the skull faced messenger, who takes him to whatever awaits after his life.

Notes: Many heroes fall in battle, only to return, or are thought dead, only to be discovered alive and well later on. This is not that story. This was a man, facing a cancer diagnosis, railing against it, before giving in and saying goodbye to those he loves and those who love him, before going out in that blaze of glory, if only in his own head. This is a hero who was laid to rest and was left there. This was a fitting eulogy for Captain Marvel or as I have always thought of him Captain Mar-Vell.

The writing and art fit together so well, that it could only be the work of one person and the best person for Marvel Cosmic was always Jim Starlin. The art is stunning, time and care taken on each pencil line and each brush stroke. It’s beautifully coloured by Steve Oliff and is a beautiful work of art. Marvel didn’t know what to do with this character, but at the end, Starlin did. Death in comics was never as poignant as this again and so it deserves it’s place in history. Every comic fan should read it, because it’s touching and proof that comics can be more than silly dressed people punching their way into problem solving.

Next Time: The Fantastic Four, John Byrne and Terrax the Tamer

One thought on “January 1982: Death of Captain Marvel OGN – Or, that’s what the alien boys like, hot skeleton chicks”

Well that was a little worrying.