Synopsis: Amazing Spider-Man Annual 16 was written by Roger Stern with art by both John Romitas and opens with Peter (Spider-Man) Parker running through a bus terminal, when a beautiful woman passes him and sets off his Spider-Sense. Realising he has 15 minutes to spare before meeting his friend Harry and his wife Liz off the bus, he decides to follow the woman, to see why he needed to be alarmed. (For the sake of argument, lets call this dumbass decision #1) he follows her into an alley, where she is accosted by two ne’erdowells called Scud and Mojo. These two grab the strange woman, who proceeds to kick a few different shades of s**t out of them. Scud runs away only to face the punch of Spider-Man, who puts him back on the floor. He then approaches the lady from behind (dumbass decision #2) and she assumes he is Scud, or another of Scud’s friends and zaps him across the alley. She turns and sees that it’s Spider-Man and then flies off after shedding her regular clothes for a distinctive silver and black costume before flying away after turning into lightning.  She arrives on the top of the Empire State Building and we get a good look at the new Captain Marvel.

We then get an origin story, in New Orleans, harbour patrol Lt Monica Rambeau is frustrated with the rampant sexism of the harbour master, who sees it more that Monica is a bit of a loose cannon. She is then approached by Professor Andre Leclare, an old family friend, who asks her to look into an oil rig, owned by generic South American dictator Generalisimmo Ernesto Ramirez and operated by Leclare’s former assistant Felipe Picaro using Leclare’s research into other dimensional energies to create a weapon. Rather than going to anyone within the harbour patrol, or any other authorities, Monica heads out there on her day off, taking the professor with her.

Using the old I have boobs distraction, Monica gets onto the rig and very close to Picaro, but the professor sneaks onto the rig and starts tampering with the weapon there, despite being told to stay below. After blowing her cover, the professor is unable to stop Picaro from trying to destroy Fort Benning in Georgia. Monica starts smashing the machine up, there is a BOOM, a flash of light and she wakes up miles away on the waterfront. She gets inside a warehouse and radios a nearby US naval ship. Realising she is wandering around in a bikini and robe, she loots some stuff from the warehouse, and this becomes the Captain Marvel costume. She goes to the dock, see’s the energy coming off the rig in the distance and wishes she was there to help the professor. There’s a flash of light and she’s there. 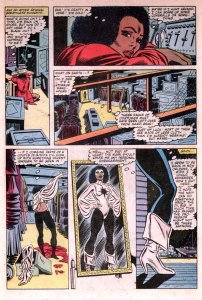 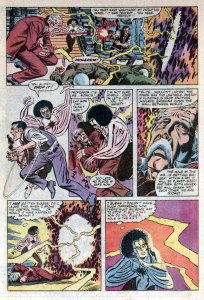 There’s a battle between her and Picaro and the weapon’s overload is stopped (the point is raised that Monica may have caused the overload) Monica absorbs the errant energy and ends the threat, but not before the professor is shot at. She stops the bullet, but that’s not the first injury he has sustained, so she takes him with her. One of the oil-rig workers see’s Monica save them all and refers to her as a marvel and that the professor kept calling her ‘mon capitaine’ so  the newspapers get the name Captain Marvel. We then get a description of her powers, which are that she can convert herself into energy or as Warren Ellis put it ‘any kind of energy, except the ones they make up in Star Trek’. Professor Leclare gives her a copy of her hastily assembled costume only made of unstable molecules (we never find out how he got that, but that’s not the biggest plot problem here is it?) she then quits her job at the harbour patrol and goes on to be a super-hero. 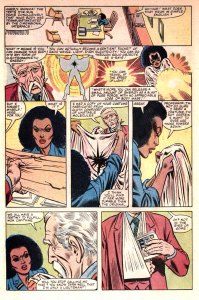 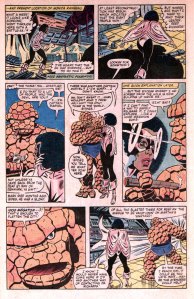 Fast forward several weeks later and she’s about to explode and has come to New York to find someone to help, after using binoculars she goes to the Baxter Building after leaving the Empire State Building. Spider-Man tries to stop her, for …reasons? He fails and tries to look where she’s going using the binoculars from the building’s viewing area. He didn’t however, bring any coins (dumbass decision #3) and has to convince a little boy that he exists before he can borrow one. He uses the binoculars to see where she was looking at and then heads for the Baxter Building as well. Monica arrives at the Baxter Building, home of the Fantastic Four) and looks for help there, only to find that Reed (Mr Fantastic) Richards is away with his wife and the only person there is the Thing. Using the FF’s radio set up, she heads to Avengers’ Mansion to seek help. Spider-Man arrives and finds this out, but doesn’t wait to get full story (dumbass decision #4) and rushes off, thinking this woman is a menace (do we mention the staggering irony of that sentence?) and heads to the Mansion after here.

After knocking down Iron Man as she arrives, Monica tells him her story and Iron Man is eager to help. Then Spider-Man arrives and tries to grab Monica, but doesn’t listen to her apologise and try to put off their fight, until the danger is past. Spider-Man then knocks her out (yup, that’s #5) Iron Man and the Wasp arrive and explain the situation and then using cable from the wall and Spider-Man’s webbing, Iron Man leeches off the excess energy from Monica upwards into the sky and away from anyone who could be hurt.

There’s then a nice little meeting of the Avengers, which Spider-Man attends, until he realises that he’s late to meet Harry and Liz and runs out, only to learn that they are late as well and apologise to him for keeping him waiting.

Notes: Why is this an Amazing Spider-Man story? This would work so much better as a Marvel Team-Up story. Not the biggest problem with this story, but it’s the first I thought of. There’s nothing wrong with the dialogue and the art is fantastic, a nice reminder of how good John Romita Snr is and a showcase for the growing talent of his son. Spider-Man is as much the villain of the piece as any kind of hero and this is really Monica (Captain Marvel) Rambeau’s story. There is a lack of female heroes at this time and not many black heroes either and Captain Marvel being both is a good thing, mainly for it not being made more of a thing. She would go on to be an Avenger, even leading the team at one point, but she’s not really been too prominent after the 80’s, much to Marvel’s shame.

Overall an interesting, if not great story, but a reminder that better stories were to come.

One thought on “August 1982: Amazing Spider-Man Annual 16-Or, are we sure Spider-Man is smart?”