Synopsis: Invincible Iron Man 166 was written by Denny O’Neil and drawn by Luke McDonnell with inks by Steve Mitchell. The story opens with low grade Iron Man villain The Melter, walking into Stark International head office to see Tony Stark, but not getting past personal assistant extraordinare Bambi Arbogast. Stark himself is in Scotland after an Iron Man battle which has left James Rhodes hospitalised. Stark’s lady of the moment Indiries Moomji takes him to a pub, where he avoids having a drink, but not comfortably. With no pilot and an expired pilot’s license, Tony has to fly back to Long Island on a plane with no working toilets, no luggage, no food and a four hour delay. If that’s not bad enough, a flight attendant spills a load of martinis on him. So this recovering alcoholic, with a preference for spirits, is smelling martini for several hours. Another brush with alcohol.

Elsewhere, we learn that there is someone behind the fight in Scotland, who is planning the final and When l defeat of Tony Stark. Back at Stark International, Tony arrives, sees the Melter and armours up to face him, the  battle pretty much ruins the office building. Later security chief Vic Martinelli tells Tony that the person behind a lot of what is going on, is arms manufacturer Obidiah Stane.

Stark flies to Utah, where Stane is based and is beset by bad luck and technical difficulties until he armours up to find Stane, after battling a series of advanced weapons and automated tanks. Finally face to face with one another, Stane admits his part in Tony Stark’s recent misfortune, but points out that other than kill an unarmed man, there is nothing Iron Man can do. (Imagine if Tony had thought about recording equipment in his armour) Iron Man is sent on his way, after being told that there will be three surprises, one of them pleasant.

When he gets back to Stark International, Tony learns that he has lost out on several overseas contracts and that Rhodey has disappeared. Tony gets back to his office to find left for him on his desk is bottle of whiskey and a single glass. 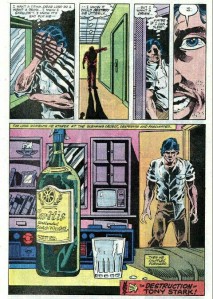 Notes: This is the beginning of the fall of Tony Stark. It’s also his first meeting with Obidiah Stane, who for a legitimate business man, dresses like a disco super villain. The dialogue is at times ridiculous, but the overall story of Tony being whittled down is both tense and fascinating.

This is a great point in Iron Man with solid creative teams, robust supporting cast and a plot that wouldn’t be out of place in a HBO TV series. Yes there is some 80’s silliness, but that’s all part of the fun. The Melter not getting past the girl at the front desk is hilarious.

This was a mixed bag, lots of stuff happening at breakneck speed and you have a need to read the next issue. Everyone waxes poetic about how good Demon in a Bottle is, but this slow and dramatic fall from grace is the benchmark for this era for me. Iron Man at his best.

Next Time: God, man and speeches, lots of speeches.