Synopsis: Avengers 228 was written by Roger Stern, drawn by Al Milgrom with Brett Breeding inks and opens with news coverage of the treason trial of Dr Hank (I’ve been many Avengers) Pym. We are then shown several  reactions from the  Avengers, we get distress from Wasp and Thor, anger from She-Hulk and a great sense of failure from Iron Man, who is trying to determine whether Hank was under the control of someone when the crimes were committed.

Then we get to see that Egghead (Yup, he calls himself egg-head) has recruited Moonstone, Tiger Shark, Beetle, Shocker and Dr Chun (the Radioactive Man) Lu, to form the new Masters of Evil. 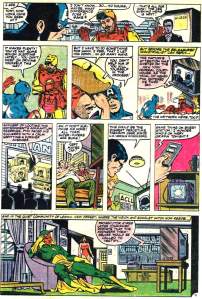 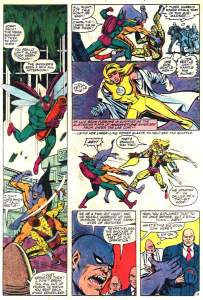 There are then more scenes of Avengers, this time former team members, like Hawkeye, Scarlet Witch and Vision, who is so incredibly relaxed and comfy on his chair, it almost causes me envy. 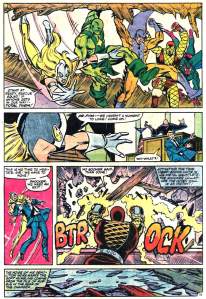 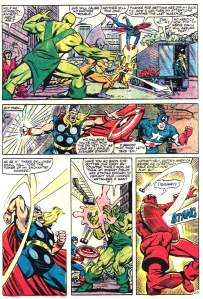 We return to the trial, with several of the aforementioned Avengers in the gallery as the Masters of Evil attack and kidnap Hank, under the guise of rescuing him. All but the Shocker escapes, who confirms that this was a rescue, even passing a polygraph test (we’re going to ignore how unreliable they are and inadmissable too) and Egghead offers Hank a place on his team, in need of his services. With no one to believe his side of events and almost no hope left, Hank agrees.

Notes: I love this era of Avengers, mostly for this ongoing story, the fall and rise of Henry Pym. On another blog I have, I wrote an impassioned defence of the character and the way he has been portrayed in the past. One of the reasons for this, is that this era showed everyone how versatile and compelling a character he is. The art and colouring isn’t fantastic, but the story pulls you in. Captains America and Marvel training together, Vision at home, so very relaxed and Iron Man, barely holding himself together, trying to prove Hank’s innocence, mainly to assuage his own guilt for dating Hank’s ex-wife Wasp.

I enjoyed the battle in the court-room and the full extent of Egghead’s plan and how it leaves Hank seemingly with nowhere to go, no one to turn to and no hope. That is what you can do with an ongoing series, because at this point, all you want to know is what will happen next?

A great issue, part of a great time in Avengers history, if you’re only knowledge of the Avengers is from the  movies, or the Bendis-crushed-by-events era comics, then this is the kind of story you’re missing out on.

Next Time: X-Men vs New Mutants (well for a page or two anyway)

Before I go though, the link for my Dr Pym post

and a picture of the very relaxed Vision.