Synopsis: Uncanny X-Men 171 was written by Chris Claremont with inks by Bob Wiacek and a guest pencil spot by Walt Simonson and opens with Ororo ‘Storm’ Monroe declaring her leadership of the underground mutant community known as the Morlocks. She had stabbed the previous leader Callisto, through the chest and took her place. This act of savagery startles Kurt ‘Nightcrawler’ Wager, but not nearly as much as Storm’s matter of fact-ness about it. A (just about) surviving Callisto is left in charge as a sort of regent and Storm leaves, impressing upon the Morlocks that the best course of action is for them to behave as she goes. 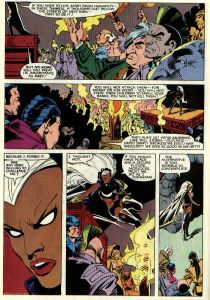 In a subplot, Madeline Pryor wakes from the nightmare of her plane crash survival and is comforted by her new love Scott ‘Cyclops’ Summers. He holds her and she tells him about the crash, for the first time giving him the date, it was the same day as the Phoenix died. Dun dun dunnnnn.

At the X-Mansion, Colossus is cooking, Professor X is struggled to walk in his newly cloned body and Kitty Pryde is throwing one of her usual tantrums. As all this is going on, Professor X senses someone approaching the door and telepathically requests Colossus to go get it, finding Rogue of the Brotherhood of Evil Mutants. Rogue is there because she has recently and permanently absorbed the powers and memories of Carol (used to be Ms Marvel) Danvers. She can’t control her body or mind and is begging Professor X for help. 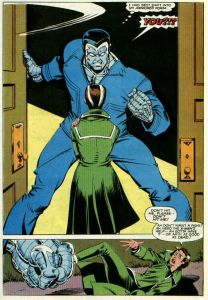 Well since we brought her up,  subplot 2 takes us the Carol Danvers’ childhood home, visiting the mother and father that she remembers, but has no emotional bond to, a side effect of Rogue’s attack on her. She is aware of her past, but has no real emotional context for it. It’s hard to imagine how painful that lack of feeling, would feel. She flies off (in her new costumed identity of Binary) to see the X-Men. 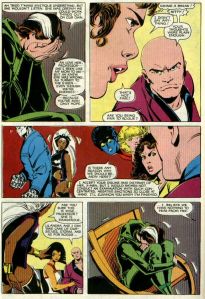 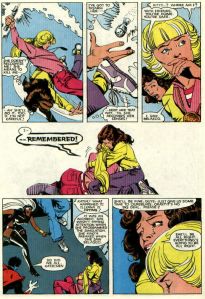 Back with the X-Men, Rogue is seeing resistence to getting help from Professor X from his students. Storm and Nightcrawler declare that they will not accept Rogue in the Mansion. Then Storm Colossus and Nightcrawler get into a Danger Room training session, administered by Kitty ‘Shadowcat’ Pryde and Ilyana ‘Magik’ Rasputin. Ilyana almost unconsciously creates a simulation of her time in the dimension called Limbo, where she was influenced and corrupted by the demon sorcerer Belcasco, this sends her into a PTSD related attack.

Professor X calls the team to him as Binary arrives and seconds later, Rogue is seen having been punched into near orbit. The fight looks ready to escalate, till Colossus and Professor X step in. Angry at Professor X’s intent to help Rogue, Binary departs the Earth, leaving only the X-Men and Professor X’s alien girlfriend Lilandra Neramani to discuss Rogue’s fate. 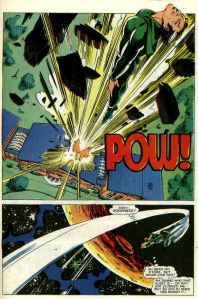 Rogue is offered a place in the school and membership of the X-Men, which to be honest, the X-Men do not take well. The team, led by Storm, threatens to walk out. Rather than back down, Professor X points out that they have already offered this same chance to Wolverine and it was Storm who argued for him. The team concedes. Storm walks away, wondering of how much she is changing and how much of her is Ororo and how much of her is Storm and which she wants to be.

Notes: For a super hero comic, there’s only one punch in the whoel story, but it never at any points feels boring. There’s character development, subplots, philosophical debate and high drama and it is great.  Even Professor Xavier, who I find to be less and less of a heroic figure, wins me over with his defense of Rogue, an enemy, moving in and joining the team. This is Claremont’s purple prose at it’s purple best.

The art is equally magnificent, the pencils are sharp and exciting and very X-Men. It was a shame this was such a short stay on the comic, but Walt Simonson wasn’t done with the X-books.

I loved this issue, though I accept that I’m biased, doesn’t mean this isn’t an excellent comic.

Next Time: We walk into the Marvel Universe’s most dangerous place ….. Canada

Before I go, I can’t write about the X-Men without mentioning the Jay & Miles X-plain the X-Men (because it’s about time someone did) podcast, a loving look at in their words “the ins outs and retcons of our favourite super hero soap opera. If you have ever read comics or watched a comic book movie, this is one for you. The podcast is here