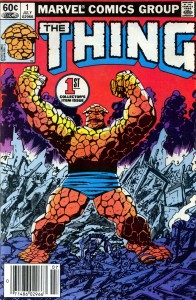 Synopsis: Thing 1 was written by John Byrne with pencils by Ron Wilson and inks by Joe Sinnott and opens with Ben ‘The Thing’ Grimm standing on the corner of Yancy Street looking at an old building, before he goes in. 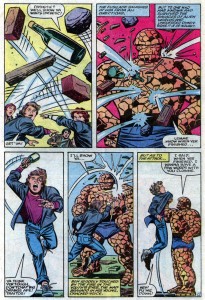 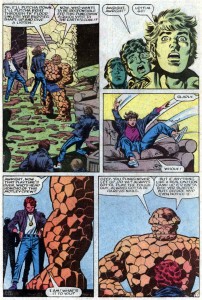 He finds the current incarnation of the Yancy Street gang and after a barrage of bricks and bottles, calmly and carefully, tells the story of his life.

The death of his gang leader brother when Ben was 8, the death of his parenmts a decade later, his adoption by his uncle and aunt, his pre FF adult years are all shown. It is a nice little primer of the Thing’s history and it answers a lot of questions about why he is as he is. The crime in his past, his violent temper seem at odds with the college educated pilot he was when he went in that rocket. The gang and it’s leader are unimpressed, Ben tries to point out that the world is bigger than Yancy Street, but the gang still calls him a traitor. He leaves, unsure whether he did anything other than open his old wounds. He walks off into the distance with the gang leader’s father and the two decide to drink to old times and leave than gang’s decisions to the future.

Notes: This is a bit of an odd duck of an issue 1. The team is from the last issue of Marvel Two in One and the story doesn’t seem to be the start of anything else. Before the era of all new era and brave new direction, this was a nice done in one character piece.

But it is a good Thing story, we got some nice character work, we see the beginnings of Ben, before his heart was hardened and before his skin was too. While this is a less epic story that Fantastic Four 51’s this man this monster it is another story that highlights the greatest part of the Thing is his mind and soul. This was a beautiful story, the dour ending being perfect.

There are better Thing writers and better Thing artists, but Byrne and Wilson work together to weave a great story. By the end I was invested and wanted to know whether Ben made an impact on those kids and how long these refreshed demons plagued Ben’s heart. By the end, I care and that is the mark of a great story.

Next Time: Angry X-Women and a cooking Colossus.