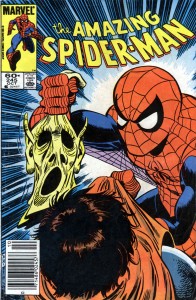 Synopsis: Amazing Spider-Man 245 was written by Roger Stern with art by John Romita Jnr and Dave Simons and opens with Spider-Man trying to get some information from New York’s DA Blake Tower, specifically information regarding Lefty Donavan, suspected by Spider-Man of being the Hobgoblin,  a new Green Goblin inspired villain. Tower, as you can imagine, tells him no and Spider-Man leaves, realising that he can’t deal with the DA without connecting the dots between the Osborn family and the Green Goblin.

In Long Island, a pair of unseen criminals are experimenting with the Green Goblin formula, one leaves and the other causes the chemical formula to explode, he is badly burned and taken away by paramedics, his accomplice/boss flees after destroying any evidence left in the house. Spider-Man sneaks into the upper floors of the Daily Bugle and looks through the newspaper’s files on Lefty Donovan. Whilst there he meets Betty Leeds, his first ex-girlfriend, who takes him to dinner with her and her husband Ned. Once he gets there, he realises that it’s a set up with him and the woman who said no to his marriage proposal, yeah that’s right, Peter’s ex-girl friend and her husband set Pete up with his ex-fiance and then proceed to critique his plans to quite grad-school and focus on his photography career. Wow, that’s good friendship s**t there. 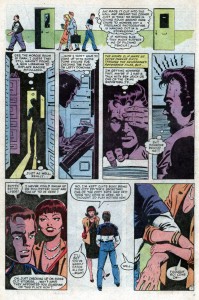 Weeks pass and the unseen man wakes in hospital and slowly makes his way out, then after stealing clothes from an orderly he kills and a car from a doctor, he drives back to Long Island, goes under the house and dresses in the Hobgoblin costume, taking care to add sensors to his chest. As the Hobgoblin he vows to teach Spider-Man, the meaning of fear. Meanwhile Spider-Man has been looking for the Hobgoblin for those weeks and talks to a Detective Lou Snider, who lets him look at the files he asked about, but in a very ‘I didn’t show you this’ sort of way. Spider-Man learns that Lefty Donovan was arrested at the time that he last battled the Hobgoblin, so it can’t be Lefty. Snider comes back in and tells him of the Hobgoblin being all rampagey in mid-town. 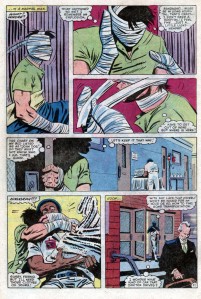 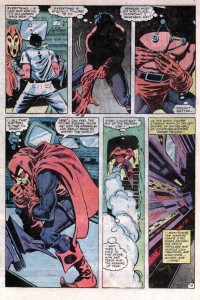 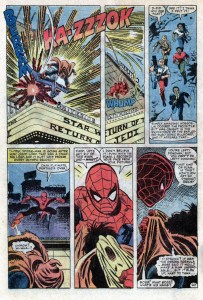 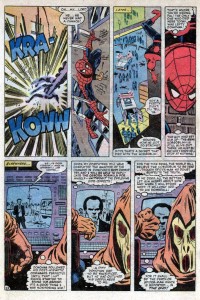 Surprised by this and the revelation that Lefty has a boss, Spider-Man asks for more info, but Lefty’s glider pulls him away and into a building. There is an explosion, Spider-Man survives, but Lefty (and to the world at large Hobgoblin) does not. Elsewhere, the ‘real’ Hobgoblin is happy with his plans, his hypnosis of Lefty gave him a scapegoat, his sensors have analysed the formula to make it safer and other than Spider-Man, everyone thinks that the Hobgoblin is dead. Soon though, it’ll be Spider-Man who will be dead.

Notes: Roger Stern is often overlooked as a comic writer, less superstar flash and more in the trenches worker, it’s easy to not think of him as great. This is a trap I have fallen into myself, but here, he shows me how wrong I am. His pacing is good, the dialogue is 80’s but consistent. The Hobgoblin’s identity being secret is a great hook, similar to the Green Goblin stories of the past, but here played to better effect. Lefty being sacrificed makes so much sense, showing his boss to be smarter than his peers and a true threat to Spider-Man. The art isn’t quite so clean and tight, Romita Jnr’s faces need a little work to be honest, but his action scenes are great, his rendition of the Hobgoblin is both flamboyant and threatening. The story had me thinking two thoughts as it finished, one was that I wanted to read more, to get into this Hobgoblin story in more depth. The other was that it’s not just Peter who is a d**k, his friends are just as bad.

Next Time: Hammers, Horns and Horse-heads, it’s about to get epic up in here.