Synopsis: Daredevil 202 was written by Denny O’Neil with art by William Johnson & Danny Bulahadi and opens with Matthew Murdock, in his full Daredevil outfit swinging his way across New York, back to his law offices, during this travel, we get a quick run down of recent events before he gets to work, to find Franklin ‘Foggy’ Nelson, trying to alpha-male his way to be the more popular/successful law partner. As there starts to be a bit of an atmosphere between Matt, Foggy and legal secretary Becky Blake, they are interrupted by Professor (and he does stress that bit) Horatio Piper introduces the chief of the long lost Kinjorge tribe of southern Africa. They are descended from lost British colonists from the 18th Century and after their discovery by Belgian geologists are becoming something of a novelty sensation. Becky notices that they are very unpleasant towards both Becky and Matt, for their handicaps. 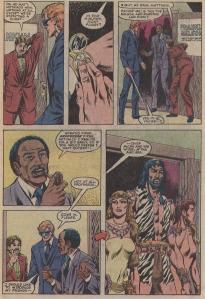 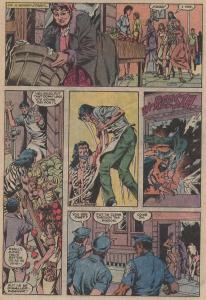 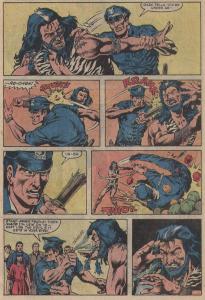 Once outside the building, Chief Micah takes an apple and when asked for money, puts the grocer through the window. A beat cop sees this and tries to intervene, there is another fight and the cop’s mace comes out. Micah is arrested and Franklin & Murdock are called.  Foggy gets the judge to agree to bail and when the five of them (Prof Piper, Micah, his two wives and  Foggy) leave, one of the wives is hit by a car. Micah doesn’t react at all to this. The police from the previous arrest are also there and they get the chief’s wife to the hospital. Micah gets one of the cops alone  and attacks him, holding him out of a window, until Daredevil attacks him. There is a brief fight and, in an unfamiliar place and time, Micah is stopped by a capable and prepared Daredevil. Who points out with Micah’s ruthless nature and cold vengeful rage, he may be the most dangerous man he has ever met.

There is also a back up tale as part of assistant editors month, which was a line-wide month long event, showcasing more off-beat and silly stories, the idea being that you could blame the assistant editor and not the editor. This one, by Mike Carlin and Luke McDonnell,  had a young boy Dirk McGirk, doing show and tell at school as the ‘Daring Devil’ who goes on to tell the class about his costumed career, getting all the names wrong and aggravating his teacher Miss Speld. As he finishes his tale, the real Daredevil punches his old sparring partner Turk through the school window. The kids surround Turk and Daredevil comes and retrieves him, thanking the school kids for their help. A furious Miss Speld thinks that McGirk has set the whole thing up and tells the class that school is dismiss due safety concerns. McGirk can say nothing, after meeting his hero, but the rest of the class, given the rest of the day off haul him to their shoulders and cheer.

Notes: I want to like this story, but there are so many things wrong with it, the Kinjorge tribe are a very iffy sort of characters. The whole long lost tribe, hidden for centuries isn’t a bad thing, but the whole neighbouring tribesman thing left me with a bad taste in my mouth. The character of Chief Micah is interesting, but this short story does very little to expand upon it. The artificial tension in Nelson/Murdock is laughable as is Foggy’s moustache. The art is ok,  but no more than that, leaving the weight to fall on a script by Denny O’Neil that is far beneath the quality of work that man can do. Very much a damp squib.

Next Time: X-Men and some tiny toys.