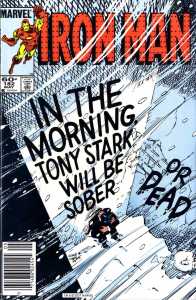 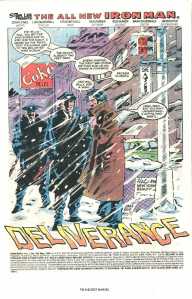 Synopsis: Iron Man 182 was written by the legendary Denny O’Neil with pencils by Luke McDonnell and inks by Steve Mitchell and opens on a drunk and homeless Tony Stark being warned by some helpful police officers about a cold front coming in. Tony is only concerned with one of his fellow winos, a lady called Gretyl. She’s missing and he is determined, even in his delirious state to find her. He’s also out of booze, so he sells his last possession, his overcoat to afford a strong bottle of  booze to keep him ‘warm’. He’s at his lowest point, no longer believing himself worth saving, worth living, he has lost everything and he is drinking himself to an early grave. 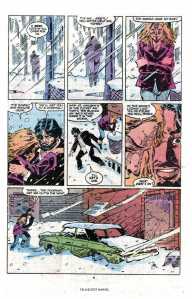 He finds Gretyl, who is heavily pregnant and does everything he can do, to keep her safe and warm. She turns down the drink he offers and he continues to drink, till she goes into labour.  The baby is born, outliving his mother, but Tony holds him close, to keep him warm. In the morning, the ice cold, but still living bodies of the baby and Tony are found and they are both evac’d to St Vincent’s hospital

Elsewhere, the Secret Wars are over and Jim ‘Iron Man’ Rhodes is back on Earth with enhanced armour and a new love of actually being the armoured Avenger. After a huge underestimation of a test of his augmented repulsors, he returns home to discuss it with his friend and technical support Morley Erwin, who informs him that Tony is in hospital. Iron Man Races there. 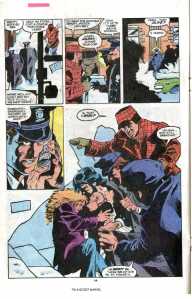 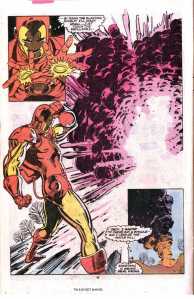 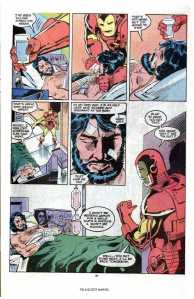 Jim finds Tony alive, but ill, suffering heart damage, liver damage and frostbite, but he is alive and for the first time since losing his company and some could say his life, that’s a good thing. He tells Jim that he believed the baby’s life was important and worth saving, if that’s true then so is he. He’s been killing himself for a long time and now that stops, but he’s going to need help, not to be Iron Man again, he has no interest in that right now, but to recover and move forward. He leaves the hospital a week later, to start the road back.

Notes: This is far and away my favourite Iron Man story, not Demon in a Bottle, Extremis, Doomquest or Armour Wars, but this single issue. A thought is that Iron Man is Tony Stark’s redemption, or when he stopped being an arms manufacturer, but I don’t honestly see that. They are second chances and better late than never ideas, but that’s not redemption. This is Tony Stark’s redemption.

This is not a story of a hero overcoming a villain, or great odds or any of that. This is a man trying to best his internal demons and realising that he can’t do it alone. This is the human story of a man who was a hero, but realising that he needs to be a man again. In saving that baby, he decides that he is also worth saving, that his life has value, not Iron Man, not the hero, but he himself as a single human being. I am not an alcoholic, but I have my demons. I know that the hardest thing for Tony to do wasn’t survive the night, or keep the baby alive, it was that last scene where he reached out to his oldest friend and asked, no begged for help. I know that feeling and it speaks to me on a profound level. This began the next stage of Tony’s life, his road back to being the man he always felt he should be. He would falter again, be tempted again, but this is where he started to be a real and fleshed out character.

On a technical level this is also a great comic, Denny O’Neill finds the core of the drama and fleshes it out for all to see. McDonnell and Mitchell eschew the usual gloss of super-hero comics and draw a very ground level and interesting story that needed to be told. When it came to February 1984, I wondered what comic to pick, then I saw when this comic came out and the decision was made for me. This is the sequel to Demon in a Bottle, in the same way Empire Strikes Back was a sequel to Star Wars.

Next Time: Heartbreak and Tragedy for the First Family