G is for Guyver 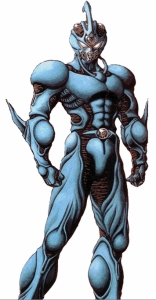 Guyver is the main character in the Japanese Manga series Bio Booster Armour Guyver, which began in 1986 and was written and drawn by Yoshiki Takaya and has been adapted into an animated movie, two anime series and two US based feature films. Guyver is Sho Fukamachi a high-school student who is accidentally bonded to a symbiotic bio-armour unit. He can summon the armour at will to battle the Zoanoids (half man/half animal monsters genetically engineered by the Chronos corporation.

Guyver as a character is a comination of Iron Man, Spider-Man and Green Lantern and his horror at the things he experiences lends him to be a  very relatable character. Reluctant to the point of whining, there is no gung-ho jingoism or celebration, this ‘hero’ is living through a horror story.  The reason I mentioned Guyver is mainly because he was my gateway into Manga and Anime and is a good halfway point between the mainstream US comics and a vastly different type of fictional media.

G is for Green Arrow 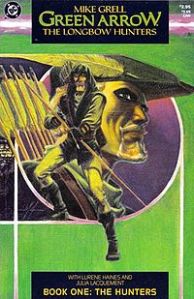 Green Arrow is a character with a long and storied history. Originally a bland Robin Hood themed Batman knock off, he changed in the late 60’s and early 70’s into a left-wing street level crime-fighter and foil for a out-of-character-written Green Lantern. By the time we got to the mid-late 80’s Green Arrow had fallen from prominence and was handed over to writer/artist Mike Grell.

Mike Grell, the man behind Jon Sable and the most memorable creator on Warlord took this less than original character and did something very different with it. He dropped it into the urban enviroment of Seattle and left the super hero trappings behind. This wasn’t a super hero story, it was an urban crime story, with an outlandishly dressed man hunting and killing the bad guys. Grell drew moody and dark very well and drew visceral violence, without glorifying in it. Starting with Longbow Hunters and moving into an ongoing series, Grell wrote a complex, flawed and times unlikable lead character. It was raw, compelling at very well done, a consistent and entertaining book for nearly 80 issues, a feat that most comics can’t manage today.

G is for Groups 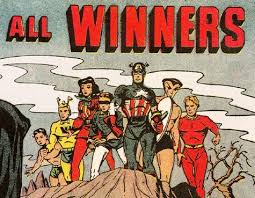 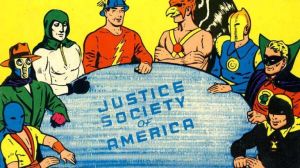 Comics are one of those strange mediums that allow for joint publishing of separate intellectual property which can also be part of a shared fictional universe. During the Golden Age of comics, the first few super-heroes appeared and seemed very much separate from one another. Then we started the idea of team-ups. This put forth the idea that these characters could meet and could know each-other. The shared universe was born. Like with the super-hero in general, DC went first. The first such en-masse meeting was All-Star Comics #3 which showcased the Justice Society of America. This team consisting of members such as the Flash, the Atom, Green Lantern, Sandman and others met at a dinner and used the issue for telling their own single stories, but soon enough they branched out and had team adventures. Marvel went next with the All-Winners Squad, later ret-conned to the Invaders. The golden age died out and then these teams no longer existed. When the superhero renaissance of the silver age happened the concept of the Justice Society was reimagined as the Justice League of America. When Timely was repacked as Marvel Comics, they too produced a team, the science hero group known as the Fantastic Four, this was followed in short order by the Avengers and the X-Men. Between these two companies we get the three basic types of super-hero teams.

Examples = Fantastic Four, Challengers of the Unknown, the Defenders.

These are teams that are together by happenstance, their being a team is a consequence of of something else, whether members stay or go, they’ll always be part of that team’s story.

These are teams which the members share some connection, which the team forms around.

X-Men – Mutants, defending a world set against them

Legion of Super Heroes – Teenagers from other worlds.

This gives the teams a family feel to them and increases the non-action drama, who goes out with who soap-opera sort of story-telling. This leads to greater characterisation and greater risk to each member.

These are usually made up of bigger name heroes, many of them successful on their own, banding together to fight a common threat larger in scope. There’s a greater emphasis on action to the detriment of characterisation, which is often left to the character’s own books. The character work is left to lower tier characters.

Each type offers something different and many teams are a Venn diagram covering more than one of those catergories rather there being a one size fits all.

G is for Groot