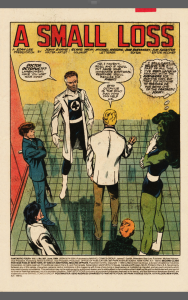 Synopsis: Fantastic Four 267 was written & drawn by John Byrne and opens with a meeting of the minds. Dr Reed ‘Mr Fantastic’ Richards is talking with Dr Walter ‘Sasquatch’ Langowski, Dr Michael Morbius (the living vampire) and Dr Robert Bruce ‘the Incredible Hulk’ Banner. They are meeting to try and save the life of Susan ‘The Invisible Girl’ Richards and her unborn baby from complications due to strange and unusual radiation. There’s someone else who can help according to Walter, Dr Otto Octavius, the supervillain known as Doctor Octopus. 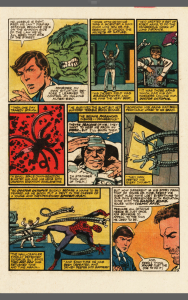 Driven by the desperation  of a terrified husband and father, Reed agrees to ask him for his help and heads to the psychiatric hospital where he is being held. He talks to Otto, man to man, scientist to scientist. It works, reigniting the spark of good that was Otto Octavius. In a prison facility nearby, the mechanical arms taken from Otto when he was arrested start to move independently and seek out their owner. Halfway there, Otto see’s a picture of Spider-Man and feels unwell and the disembodied tentacles attack Reed. Otto is close to the arms and takes more direct control of them and is Doctor Octopus again. 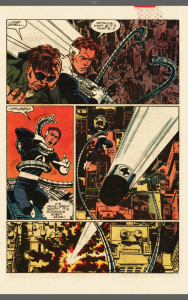 Reed manages to stop the arms working and pleads again for Otto to keep his word and help Sue. As a show of faith, he pulls back, giving Doctor Octopus control of his arms again as well as a chance to strike him. This works and the two make it back to the hospital. It doesn’t matter, Sue lost the baby half an hour earlier. 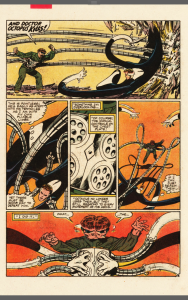 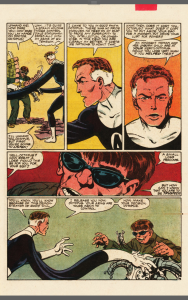 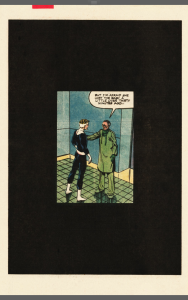 Notes: To my mind, there are three quintessential creative teams in the Fantastic Four’s history, they start with Jack Kirby/Stan Lee and end with Mike Weiringo/Mark Waid, but nestled in the middle is John Byrne. I’m fairly confident this is not the first time  I have mentioned this, but I still hold it to be true. The art is universally excellent in this issue, the bizarre airborne battle between Reed and the Octopus arms is exciting and takes full advantage of the strengths of the cast and the comics medium in general. The conversations are heartfelt and speaks to the heart of these characters as well as their minds. Reed’s treatment of Otto and his last minute plea to Doctor Octopus are the words of a husband and father and not the egotistical scientist that more modern writers seem to think Reed Richards is. Reed is a scientific adventurer and also a devoted family man and this issue showcases that dichotomy very well. The writing is emotional and gripping and that makes the last two pages even harsher. This is not a comic that the day is saved at the end, this time, Reed is too late.

I questioned myself on the idea of looking at this comic, given the subject matter. This blog is in essence a fluffy bit of geekiness. But that was the strength of comics back then and can still be today. These comics talk about addiction, tragedy, loss and other deep themes that most of the time, people don’t talk about. Look at the last two pages again, this issue isn’t about exotic radiation, or super-heroic deeds. This comic is about a reality that effects a lot of people, but no one says much about it. Taking a step out of the real world, allows this comic to talk about a very real pain that people suffer.

This story, in a handful of panels handed me an emotional gut punch that got me again on this, my third reading. This was a comic that did what comics can do so well, make you feel something.