Synopsis: Alpha Flight #12 was written, drawn and inked by John Byrne and opens with Heather Hudson meeting with Miz Delphine Courtney at Roxxon Oil’s New York Offices, where he husband James (Guardian) MacDonald Hudson had recently started working.  Rather than her husband, the only other person she see’s is a recording of Jerry Jaxon, her and her husband’s previous employer. Years earlier, Jaxon lied to Guardian about who was funding his research and what it was being used for, so he took the cybernetic helmet that he had made from Jaxon’s armour prototype and left the company, causing him to lose his job, his wife and in an unfortunate suicide attempt, use of his legs. Now with Miz Courtney’s help, he had found some of the former Beta and Gamma Flight members to form Omega Flight to take his revenge on Guardian and Alpha Flight. 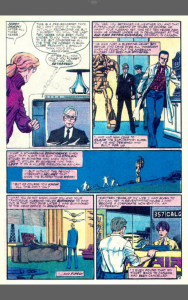 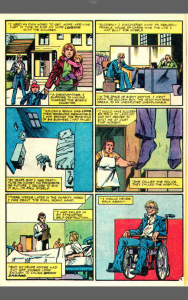 Heather tries to leave, learning how strong Miz Courtney is and that she is an android. In Canada, Alpha Flight is gathering to answer the distress call of Guardian. Sasquatch, Aurora, Puck and Northstar all converge on Shaman and Snowbird, but Marinna is too busy getting some affection from Namor of Atlantis to get the signal. The team gather and there’s some squabbling and this brings up the fact that Sasquatch is losing control of his ‘beast’ form.

They arrive in New York via Shaman’s magic to see Guardian battling Jaxon’s Omega Flight, consisting of Diamond Lil, Box, Wild Child, Smart Alec and Flashback. The battle is intense, but Alpha Flight is winning. The last pair battling is Guardian and Box, Box being controlled by Jaxon. On his last legs, his armour shorted out, Guardian decides to cause a power surge to stop Box, this has the effect of killing Jaxon, who was controlling it.

Guardian tries to open the suit up and remove the unstable power core. He has ten seconds, which count down. Meanwhile Heather has escaped and is searching the building for her husband. 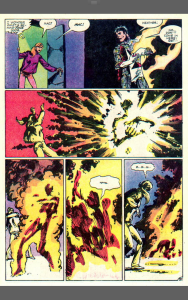 As Guardian finally at the last second removes the power source, Heather finds him and that distracting second, Guardian is engulfed in flame.

Notes: Well, that was a bit of surprise ending wasn’t it? Alpha Flight rounded out it’s first year by killing off the leader and the lead character. This wasn’t some simple good vs evil thing, this story had emotional weight to it. Jaxon’s story was skewed from his perspective, but it was compelling and relatable. His life turned to shit after Guardian took that helmet, so that was where he put his anger, which helped him get past his handicap. Guardian trying to disarm his suit had tension built in and the use of numbers as panels works fantastically well. The last page, where Heather walks in at the EXACT WRONG MOMENT may seem silly and over convenient, but it sort of rang true to me, my wife and I have very comedically bad timing ourselves at times. Overall this was more excellent work by John Byrne who ended his first year of his own creations’ comic with a literal bang. It’s sad that Alpha Flight isn’t so much of a thing now, but this was a great little title that is well worth checking out.

Next Time: Lo’ there shall be a spin off.