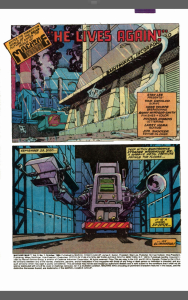 Synopsis: Machine Man 2020 #1 was written by Tom DeFalco with art by Herb Trimpe and Barry Windsor Smith and opens with a warehouse robot throwing out and obsolete container into a nearby rubbish tip/scrapyard. This box is found by a local gang of Midnight Wreckers, with the names Slick, Swift, Hassle and Brain who find the box being unopened and seek to scavenge it’s contents. A security patrol of robots and guards attack, but the robots are all destroyed by the Wreckers, who steal away on their flying vehicles and get to safe harbour. 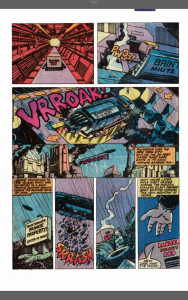 The surviving security guards head to their boss, Sunset Bain, who finds out what box is missing and goes ape at the guards and commands them to recover their contents, using whatever means. Back at their home, the Wreckers relax, while Brain reconstructs the robot they recovered and repaints it’s purple chassis with a more eye pleasing red and silver combination. After running a high voltage charge through his body, Brain notices that the robot is working and is a lot more sophisticated that he expected. It introduces itself as Machine Man. Whom nobody there has ever heard of. 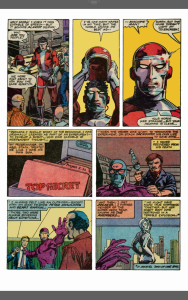 We then get a bit of recap of the Machine Man series including his identity of Aaron Stack, his friends Peter Spaulding and Gears Garvin, his villains Miles Brickman and Sunset (Madam Menace) Bain and the death of his love, the robot Joscasta, before the Midnight Wreckers fill Machine Man in on the events of the previous 35 years, with anti-robot riots, Sunset Bain getting a monopoly on robot construction and their MO of robbing junkyards and making black market robots. As this conversation draws to a close, more combat robots find them, along with a heavy combat model, a C-28 Death-Dealer. The robots attack the Wreckers and after a pitchhed battle, the Wreckers escape with a confused and despondent  Machine Man with them. At Baintronics, Sunset Bain reveals that an old enemy has returned to plague them to Jocasta.

Notes:  Nothing dates like Si-Fi set in the nearish future.  Three years to go and we’ve yet to have anti-robot riots or start referring to women as curves. The cliches are laid on thick and the usual stock characters are there. So story and cast aren’t doing anything particularly original, but the art is beautiful. Trimpe paired with Windsor Smith brings out the strengths of the both of them. The colours are wonderous, with the garish purple of Machine Man being replaced with a nice red and silver look. One part of the writing I did like was that Machine Man was as human (read: dickish) as he ever was. A standout moment was his use of  a massive surge of electricity to defeat the C-28. He’s a great character in search of a better story, this wasn’t it.

Next Time: Barry Windsor Smith returns and brings a classic X-Men saga with him.