Synopsis: Alpha Flight 16 was written and drawn by John Byrne with finishes by Bob Wiacek and opens on a fish shaped submarine, which would not look out of place on the TV shoe Stingray.  On board is the Master of the world, who has captured Eugene ‘Puck’ Judd as well as Marrina of Alpha Flight as well as Marrinna’s live Namor MacKenzie, Monarch of Atlantis. The ‘Master’ monologues about his survival after his last battle with Alpha Flight and his explaination of the origins of Marrina. We then see a more monstrous Martina in the grip of her mating instincts and the alien creature she seeks to mate with.

We then get some subplots stuff. Roger Box, formerly of Omega Flight recruiting Madison Jeffries to get revenge on Jerry Jaxon (I thought he was dead to be honest) and Delphine Courtney for the death of Guardian (see January 1984’s Alpha Flight 12) and we get a bit of a demonstration of his metal shaping powers. We also see Heather Hudson recuperating in hospital and getting a visit from a guest starring Wolverine.

Back on the submarine, the ‘Master’ continues to chew the scenery to the extent that Namor feels it’s excessive. How arch and dickish do you have to be for Namor to call you on it. 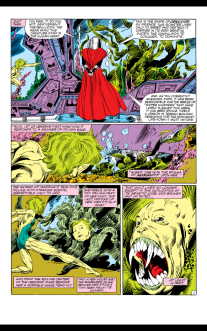 The heroes escape and Namor is able to free Martina and her mate, who in the midst of battle end up destroying the submarine, as Puck pulls the Master’s helmet off.

The Master, the alien and Martina appear lost and a despondent Namor leaves for Atlantis. Puck finds Marrina alive, but she tells him that she has to leave, that deep down she is a monster and can never go back.

Notes: This comic is beautiful, Byrne at his best drawing his own creations and a great guest star in Namor. The action sequences weree good and the subplots were interesting and well handled. Unfortunately, the main plot is not so well done. While the Master of the World is a fun and campy villain as well as a great foil for Namor , there is no real sense of why he is doing any of this, leaving the story incomplete and unsatisfying.

Next Time: Cap vs The Red Skull