K is for Kang 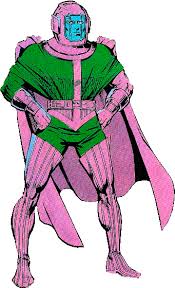 Nathaniel Richards was born into a 30th century utopian society, a descendent of Nathaniel Richards (father of Dr Reed Richards) Kang was bored to tears by this conflict/challenge free world, becoming obsessed with the struggles and wars of antiquity. He used a time machine inside a model of the Sphinx and travelled back to ancient Egypt and took the name Pharoh Rama-Tut. During this time, he met a young being called En-Sabah-Nur, who as Rama Tut knew, was destined to become the mutant Apocalypse, so he engineered events to bring En Sabah Nur to his side. His reign in Egypt was brought to an end when the Fantastic Four, seeking a cure for blindness for Alicia Masters (girlfriend of Ben Grimm) which was known to be used by Rama Tut, shortly after he arrived in the past. There was a battle, Rama Tut escaped into time, intending to return to his own time. He misses. He ends up in the 41st Century, during a time of war. The world is ravaged and the populace has forgotten many of the advanced science of Rama Tut’s time. So he quite easily is able to repair his time vessel and return to the past in armour he built from the advanced technology abandoned in the 41st century. He arrives just after the Avengers are created, creating a new timeline and where he as the Scarlet Centurion gets them to work for him, but convincing them that the super-heroes of that era will cause great calamity. He is eventually defeated by heroes from a little further on and returns again to the 41st Century only this time, to stay. He fashions new armour and calls himself Kang the Conqueror and takes over the future Earth. Confident in his power, he returns to the past to meet the Avengers and battle them, to test himself against the greatest heroes of that age. He loses. Years later he gives up his identity of Kang and returns to the past as Rama Tut and rules Egypt in a calmer and happier way, later still he abandons ruling and conquering altogether and becomes the temporal scholar and manipulator Immortus. 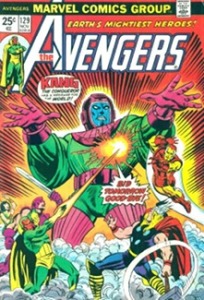 Now some of that made sense right? Ok, now imagine these events are published at different times, in different order and there are different Kangs, different Scarlet Centurions and even the ret-con heavy Iron Lad, or the period of time where Kang tries to convince Doctor Doom that they are the same person.

That is Kang in a nutshell. He’s a time travelling, confusing, self hating (to the extent of two versions battling a third) and bat-s**t crazy ret-con a-go-go. One of my favourite Avengers villains, he’s been a big part of really enjoyable stories, from early issues of Fantastic Four, to the 1970’s Celestial Madonna story, to the lamentable Crossing, World War Kang and the dense and at time ridiculous Avengers Forever. He’s the honourable villain who wants to win, but will always follow a code. Capable and strategically brilliant, he has conquered many worlds and times and is always fun to watch out for. Because of his ret-con heavy complex continuity, he is unlikely to appear in the Marvel Studio’s movies, but for me is one of the greatest Marvel Comics villains, despite the huge sleeves and purple helmet.

K is for Kingdom Come 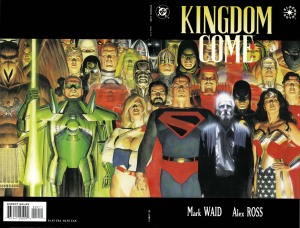 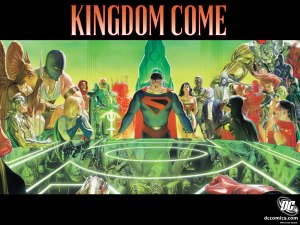 Kingdom Come was a four part prestige format (expensive with card covers and several more pages that usual) series produced in 1996 by DC comics, written by Mark Waid with full painted art by Alex Ross. Waid was establishing himself as a great writer with work on such books as Flash and Alex Ross was the darling of the moment f his amazing work on Marvels, so this was the powerhouse team of the time. It was also the era of the grim/gritty/dark heroes that proliferated at the dawn of the 1990s. This was an attempt to harken back to a simpler and more heroic time, by showing what the future of these ‘heroes’ would look like.

Set 20  years in the future (or some vague time) the heroes of now have been supplanted by violet anti-heroes who battle villains sometimes, but mostly each other. There’s no never ending battle against evil, but a battle for turf and bragging rights and the victims are the bystanders who these new capes don’t consider. After the Justice Battalion battling the Parasite are killed by the his Captain Atom’s metal skin, Kansas is now a smoking radioactive crater. An exiled Wonder Woman seeks the hermet who could have stopped this, if he hadn’t already walked away from a world that felt he was too old-fashioned to be their champion – Superman. This is a Superman that has lost everything, but when he see’s what has happened he gathers the Justice League together and comes out of retirement to make things right.

This is the story of the battle: between good and evil, old and new, heroism and vigilantism, between man and superman, between our ideals and the fallout when they hit the outside world with all it’s complexities and the price people pay for them.

Alex Ross’ art can be criticised for stiffness and his lack of finesse with sequential story-telling, but it is at all times epic, with tinge of humanity and that matches Waid’s exceptional writing, which tells the story of the end of the heroic age, yet is still triumphant. An elseworlds series that owes no allegiance to a time or a continuity so it stands out perfectly on it’s own as a world class comic story.

K is for Kirby 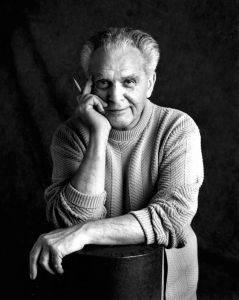 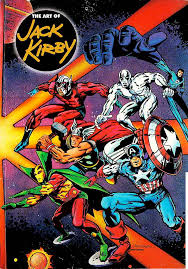 There are those people whose output and influence in a culture, medium or arena lifts them above their contemporaries. We all know them and respect their skills and contributions. Mohammed Ali was a boon to boxing and reminds one of my the boxers I have enjoyed watching most, Elvis Presley was the King of Rock and Roll, whilst Michael Jackson was the King of Pop. To comics and their associated media the is and always shall be Jack ‘The King’ Kirby. 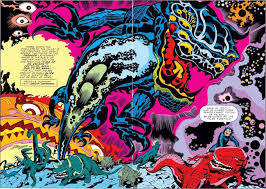 Born Jacob Kurtzberg in New York, Jack was a self taught artist born of two Austrian/Jewish immigrants who fell into comics and animation as he wasn’t what the more traditional art schools seemed to want. He got into comics and animation in the late 1930’s and used a variety of pseudonyms including Jack Curtis, Lance Kirby, Ted Grey and Fred Sande by 1940 he had settled on Jack Kirby as a professional name as a reminder of the actor James Cagney. It was around this time he met the young Rosalind Goldstein, he proposed to her when she turned 18, ‘Roz’ and Jack were married for the rest of his life. Shortly after that he began a professional partnership with Joe Simon which was fruitful and at times lucrative, the revamped Golden Age Sandman and the Newsboy Legion at National (those who would become DC) and at Timely (Marvel’s predecessor) they created a character that you may have heard of Captain America.

For me, the greatest impact that the King had was when he was doing monster and sci fi comics for Timely and began to work with Stanley Leiber (who used the professional name Stan Lee) and with that parternship and some pushing from Stan’s wife as the story goes, they produced Fantastic Four together and so began the Marvel Age of comics. Thor, the X-Men, Iron Man, Hulk and many other titles were drawn and for most of his time co-plotted 80/90% of the Marvel line at times. His cast of created characters was vast and varied from Iron Man and the X-Men, to Galactus, Ego-the living planet, the Inhumans, Doctor Doom, Silver Surfer (who was a character that Jack added to the Galactus sketch as a ‘well this guy would have a herald or something’ afterthought) as well as dozens besides. Stan Lee is given much love by the comics fans and creators, but without the epic scenes of action and the sheer dynamism of his pencils, Marvel would likely have had less success. If there is any doubt about his impact, look at how many of his co-creations made it to the cinema in the last 20 years. The relationship at Marvel began to sour with Lee taking more credit and Kirby seemingly taking the shaft. He owned none of his creations and had no rights to most of the money they made. Finally in the early 70’s he left for DC where he created the 4th World. He also worked on Jimmy Olsen as a companion title as well as creating OMAC, Kamandi and the Demon. However without such an accomplished writer alongside him, his scripting was not the equal of his art and the titles ended within 2 years. He returned to Marvel and worked on 2001 and Captain America as well as creating the Eternals series, including the Eternals, Celestials and Deviants as well the excellent Machine Man series. Finally he dropped out of the Big 2’s comics companies in the mid-late 70’s and faded away into relative obscurity, other than work in animation.

This was even more sad because as the comics reading public began to reassess his importants and talent, he passed away in February 1994. His family lost a good man, the world lost an artistic titan, Jack Kirby was a visionary who changed the landscape of popular culture, who took what was expected on the comic page and took it in new and amazing places. He drew heroes and gods and demons and grand sci-fi. He created universes as real as anything CGI could give us with only a pencil and some charcoal. People like Jack Kirby are why I love comics and why I love them still. The Marvel and DC universes were built on the back of work of his and others and have survived over 3 quarters of a century because of it. When Mark Waid wrote his excellent Fantastic Four run, there was an issue where they met God, in Waid and Wieringo’s eyes, it could only have been one person they could have used.

He was named the King as an alliterative nick-name in the credits. But he is and was the King of Comics and long shall he reign.

K is for Krypto