Synopsis: Thor#356 was written by Bob Harras with art by Jackson Guice and Bob Layton and serves as a fill-in issue in the middle of the epic Simonson era of The Mighty Thor and opens with Edwin Jarvis, housekeeper and butler to the Avengers and Hercules, who has shanghaied Jarvis to help set up a feast for the rest of the Avengers and is cutting through Central Park mid-shopping spree. 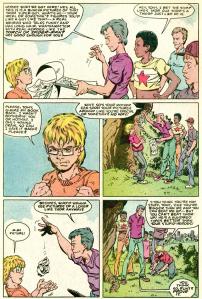 Also in the park is Matthew Linden, a young boy, is sketching his very hero Thor (this is his comic after all) who is being picked on by some bullies for his lack of interest in sports and his artistic leanings, not to mention his preference for Thor. Bullying him into facing Hercules, they force Matthew to ask who is stronger Thor or Hercules. Herc, the vainglorious and braggadocios fellow that he is begins to tell a tale of his victory over Thor in between flirting with the local ladies. 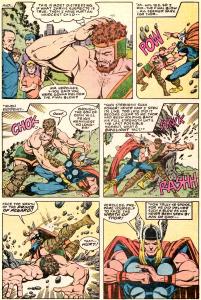 A skewed story to make Herc look good, the tale goes on and on, Matthew becoming more upset with each part of the story told. Jarvis notices this and how happy the bullies are by this and quietly points this out to Herc, who ends the story on an amazing turnabout with Thor punching Hercules from Manhattan to New Jersey. After making Matthew’s day, Herc points out to the other kids that he can’t abide bullies and that Matthew is a friend of his, before inviting Matthew to the feast he is planning for the Avengers.

Notes: This is the quintessential fill in issue, it’s light, fun and doesn’t really fit into the rest of the run. That said, with me reading these issues in a vacuum, it’s ideal. The story is a very simple don’t bully people tale and in that respect it’s nothing special, but Hercules makes the difference. I always read Herc as if he sounds like the Aquaman from Batman: Brave and the Bold cartoon. He’s loud, a bit obnoxious and so very full of himself, but deep down a true hero. He’s flirty and boastful and pulls Jarvis around like he’s a personal servant, but as soon as the truth is known to him, he makes things right. This is a fluffy comic with no real stakes or weight to it, but it showcases an interesting character in a fun and entertaining way. The art is very house-style, but not in a way that takes from the story being told, I had a blast reading this comic and despite being unsure about the choice for March 1985, was glad it was this one.