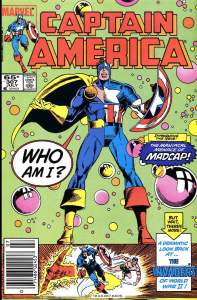 Synopsis: Captain America #307 was written by Mark Gruenwald with art by Paul Neary and Dennis Janke and opens with Captain Britain carrying Captain America to catch a flight back to the US from England, where after Cap gets on the flight for free with his Avengers ID, tries to avoid talking to a WWII veteran sitting next to him. That’s all the Cap we get this issue, seriously. That’s it and the rest is about Cap’s girlfriend Bernie Rosenthal and his room-mate Jack ‘Nomad’ Munroe who was the sidekick to the 1950’s Captain America. 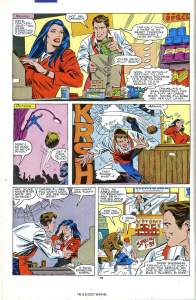 Jack is sleep on Cap’s couch after a long night of patrolling when Bernie pops by to hand over the mail. She points out  that sleeping all day won’t get Jack a job and then leaves. Jack muses on his current situation and in an effort to seemingly spite Bernie, tries to get himself a job. He manages to get an interview for a bagging position in a local supermarket. Meanwhile, an unremarkable looking man walks into a costume shop and  shoots the proprietor with a bubble gun. The bubbles cause the shop-keeper to act nonsensically and declares himself a chicken, whilst the shooter helps himself to bits of discarded costumes. 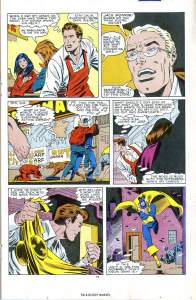 Later on we get to see that Bernie’s handblown glassware store is barely getting by and the landlord is about to hike up the rent 300%. Out on the street, our bubble gun man dressed in a colourful costume calling himself Madcap starts an insane riot in the middle of a nearby street. After shooting a policeman with his bubbles, Madcap is shot and yet seems to suffer no ill-effects, including pain or lasting damage. Back at his bag-boy job Jack is having fun flirting with cashier Carmela until the crisis outside bursts into the shop and Carmela is hurt. Jack is about to see what is going on, but his boss tries to stop him. Jack goes anyway and changes into his Nomad costume. He battles Madcap and acquits himself well, but with Madcap unable to feel pain and healing as fast as he is damaged, eventually Nomad is hit by the bubbles as well, going as mad as everyone else, which includes his hallucinating himself as half Nomad/half Captain America. By the time this fades, Madcap is gone and so is Jack’s job. He checks in with Carmela, long enough to meet her boyfriend Raoul and decides to go home and plan his pursuit of Madcap, who unbeknown to him is in the next train carriage on his subway ride home.

The issue ends with members of the Serpent Society breaking into the villain Sidewinder’s apartment to steal his beer and wait for him to return home to face their wrath.

Notes: This was a very bronze-age super hero story. Gruenwald just layers on the complications to Jack’s life and we get an almost Spider-Man level of internal angst. Cap is mostly absent and Bernie doesn’t really get a lot to do here, so Nomad is doing all the heavy lifting for this issue. Fortunately we have Madcap, who is visually interesting and a facinating character, seemingly devoid of the usual motive or pathos. He is just there to cause trouble and he does so with a great sense of fun. Like this issue he is brightly coloured and a bit bonkers, but highly entertaining. The art carries the story well and I ended up enjoying this issue more than I would have expected to, this was almost a disappointment, but not quite.

Next Time: More Mark Gruenwald as we meet a different Earth’s mightiest heroes.

The Joy of Comics – Gazing into the Longbox 2