Synopsis: Squadron Supreme 1 was written by Mark Gruenwald with Bob Hall on pencils and John Beatty on inks and opens with Hyperion trying to save the Squadron’s satellite headquarters. With the aid of Amphibian and Doctor Spectrum, he manages to bring it to the ground without any real problem. Elseswhere, Nighthawk, Lady Lark, Golden Archer and Tom Thumb try to deal with a fire from an abandoned factory. Somewhere else entirely Hawk, Nuke, Power Princess and Arcanna try to stop some looters, only to realise that they are just desperate people and when the national guard show up to shoot the looters, they battle the soliders to protect the poor and desperate people they were about to take in. 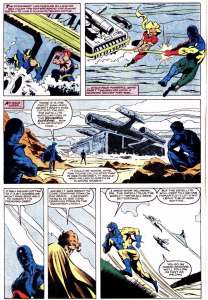 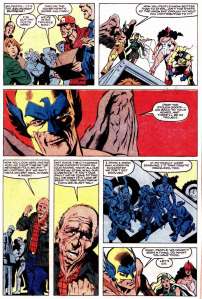 Meeting at a new base, the Squadron Supreme start to talk about their experiences and how their Earth has kind of turned to shit after the Overmind took them over, including Nighthawk, who was the US President. The world being pushed to the brink tells the team all they need to know and Power Princess and Hyperion talk about what to do about it. They intend to bring the Earth to a utopia. The team votes, the only naysayers are Amphibian, who disagrees, but will help and Nighthawk, who just sees the slippery slope to fascism so very clearly. The motion is passed, the Squadron will begin to battle not supervillains, but the rest of the world’s problems.  The team go their separate ways to tie up the loose ends of their lives. 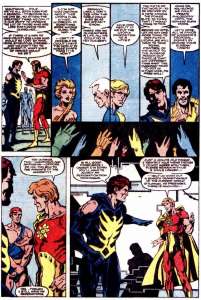 Arcanna, goes to see her family, Hawk learns that his father has passed away, with their conflict unresolved. Tom Thumb works on the satellite’s AI. Doctor Spectrum tries to scrounge up a date for the evening. Nuke visits his cancer suffering parents. Amphibian sees his dolphin family. Golden Archer and Lady Lark clear out their apartments. Nighthawk checks in at the White House. Power Princess goes to see her love, who she has been with since the 40’s. Whizzer goes to see his wife and daughter. Hyperion goes to see his on again/off again girlfriend Lonni. The world is in chaos, he flies in to an unlit room and rather than show ANY tact at all, decides to tell her that he was her colleague Mark Milton and that to be honest, he doesn’t really see them having a real relationship, he’s an alien and all that. He led her own mainly for companionship and on that heartbreaking exclamation he flies off to see if he and Nighthawk are still friends. 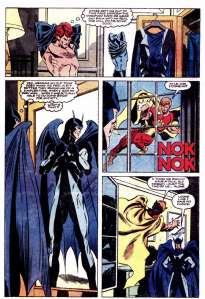 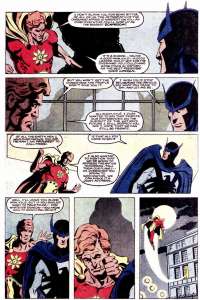 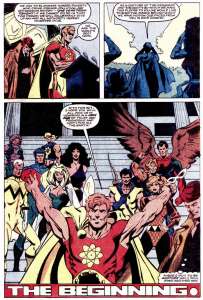 They are, but Nighthawk can see what is happening and doesn’t like it. He fashions a bullet out of Argonite and the next day at a press conference, he is about to kill Hyperion, knowing the Squadron can’t follow through with this Utopia plan without his leadership and power. The bullet is the only thing that can kill Hyperion, but just as he announces that they will take over and help create a better world, Nighthawk realises that he can’t shoot his friend to free the world.

Notes: Well lets get this out of the way, the Squadron Supreme is very thinly veiled Justice League of America pastiche. This is another Earth, but this is Marvel’s take on the League. Each character is a direct analogue.

That doesn’t really get in the way of the story, in the same way that the characters in Watchmen are the Charlton Heroes. This isn’t however Marvel’s Watchmen, this is a more hopeful story and a more mainstream examination of what happens when heroes try to make lasting changes in the world they live in. Unlike other hero vs hero stories, I can happily see each side. Hyperion wants to save the world, especially from itself. I get that, but Nighthawk sees that giving Utopia, without man earning it, will cause more problems down the road and it’s not hard for this to become a police state. This is the skill in what Gruenwald does. He knows these characters, he breathes their stories and lays the story out in bite size chunks to make this a satisfying issue. The pencils and inks are also very capable and fitting for the story, but the colours haven’t aged well and it’s clearly the writing that makes this such a great read.

This is worth giving a try, it is a stand-out by Gruenwald, who had a long and solid career, but is often overlooked  by history.

Next Time: Pouches, mullets and stuntmen, Oh My.

Stuff in my head – Or goodbye chief