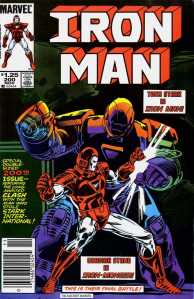 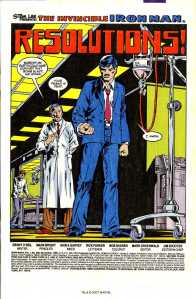 Synopsis. Iron Man 200 was written by Denny O’Neil with pencils by Mark Bright and inks by Akin & Garvey and opens with Tony Stark being told that his friend Morley Erwin died in a car explosion caused by Obadiah Stane. James Rhodes is trying to be supportive whilst Morley’s sister Clytemnestra blames Tony for Morley’s death. Tony is angry, angry at Stane, but more so at himself, for avoiding becoming  Iron Man again and facing the man who took everything away from him. He’s aware that other friends have been taken and decides to take responsibility and do the one thing he has been dreading. He leaves and arrives at the West Coast Avengers compound and walks right past team leaders Hawkeye and Mockingbird while at Stane Obadiah is gloating over his victories with Bethany Cabe who is claiming that she adores him as she once did Stark. Stark himself is assembling his new prototype armour and almost inevitably becomes the Invincible Iron Man. Calmly, we walks out and flies to his old factory and offices, which are currently the headquarters of their new owner Stane International. 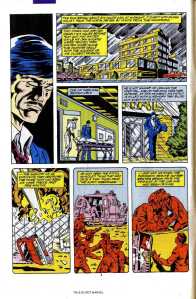 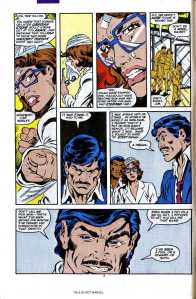 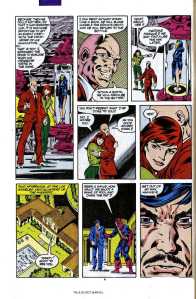 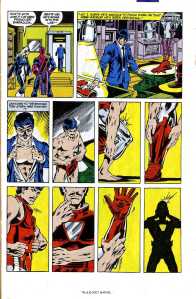 Iron Man flies off and heads to what is now Stane International, where Obadiah Stane is gloating alongside who I’m assuming is Bethany Cabe and shows off several acquaintances of Tony Stark, who are his captives, being treated by Dr Atlanta (who he collected from an insane asylum) and an armour inspired by Tony Starks notes, the Iron Monger. He’s enjoying his continued victory of the drunk and destitute Tony Stark, till he is informed that Iron Man is there to see him. 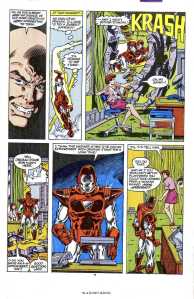 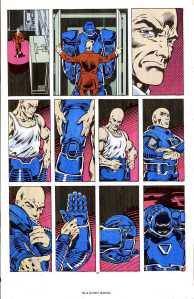 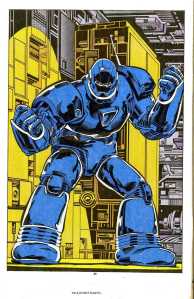 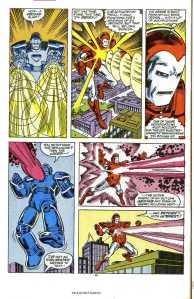 He dresses in his armour after his first attempt to hold Iron Man back fails and the two battle. The Iron Monger suit is more powerful and computer controlled, whereas Iron Man’s new sleeker model is assisted by Tony’s experience in the suit. The Stane International complex takes a pounding and equipment starts overloading and disaster is imminent. There’s an explosion and Stane uses it to get to an underground section, quickly followed by Iron Man, who finds Stane’s hostages. Stane now has a new move to play, if Iron Man takes one step forward, or moves in any other way, all of the hostages will die by electrocution, so he can stand in the armour and starve to death, or kill friends and colleagues. 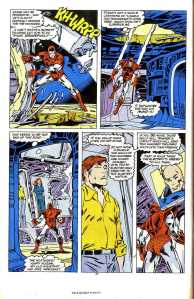 Iron Man uses his chest laser to cut the power and chases after the gloating Stane. Who now holds a baby hostage. Working out how the Iron Monger works, Iron Man attacks the computer building and Stane loses control of his suit, the baby is saved and Iron Man corners Stane, who in defiance of Iron Man’s victory, takes his own life. 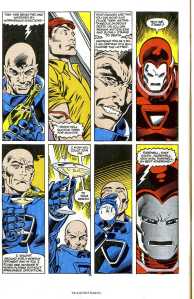 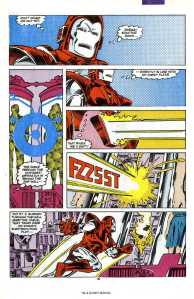 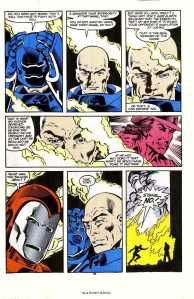 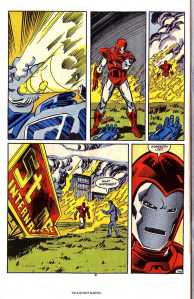 Notes: It’s hard not to compare these to the recent Iron Man movies, having watch the first one with my son yesterday morning and remembered moments from the third film, but that just points out how good some of these stories were, that they have lasted till their adaptation. In Iron Man #182, we begin the redemption of Tony Stark (  https://marvelmunky76.wordpress.com/2017/02/01/february-1984-iron-man-1982-or-maybe-dont-asked-rhodey-to-help-with-landscaping/  ) here we see the triumphant return of Iron Man. While there was a lot of enjoyable stuff in the Jim Rhodes as Iron Man era, it’s the flawed and determined man behind the Iron Man that I am here to read about. The battle between Iron Man and Iron Monger is both emotional and physical and the facial features drawn by Mark Bright excel in that regard. The new suit is different enough, but still very much Iron Man and it further moves the series from it’s more old school roots, without abandoning the things that made Iron Man work. It’s not a perfect issue, the art lacks the epic feel that it could have, but this issue returns Iron Man to where he should be as the hero he can be. This was a nice little antidote to the lackluster Captain America 300 and I thoroughly enjoyed re-reading this bronze age classic.

Next Time: Legal drama costumes and alien girlfriends, it’s back to the X-Men.