Synopsis: West Coast Avengers 5 was written by Steve Englehart and pencilled by Al Migrom and inked by Joe Sinnott and opens with Simon ‘Wonderman’ Williams getting a telling off by Clint ‘Hawkeye’ Barton about his recent on-air confession of his guilt in the embezzelment from his own company years earlier. Without informing the Avengers ahead of time, it has put the team in an awkward position. Sides are chosen with Greer ‘Tigra’ Nelson siding against Clint, with Tony ‘Iron Man’ Stark again Simon with Bobbi ‘Mockingbird’ Morse supporting Clint also, but acknowledgement soon comes that he’s being an ass.

In a seperate room, Bonita ‘Firebird’ Juarez and Ben ‘The Thing’ Grimm are talking with the former super hero Doctor Henry Pym, just as the team holds an impromptu press-conference in support of Wonderman’s actions. Simon himself slinks off as soon as it’s done and heads to the beach, followed soon after by Tigra, who helps with his turmoil with a bit of seaside afternoon delight. 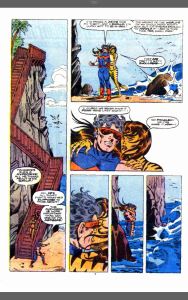 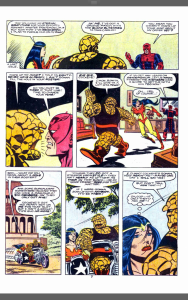 Firebird and the Thing leave with an uninterested Thing asked to join and the eager Firebird being ignored and then they are gone. Mockingbird finds a distraught Tigra who is appalled by her seducing Simon and asks for her help to control her cat-like impulses. Bobbi tells her to rest in one of the bungalow’s used as the Avengers’ base, whilst Hank gets a call from Ultron. The call is terse and brief and Tigra walks in afterwards to the two find comfort in one another’s arms, with Tigra purring as an oblivious Simon walks past the window. Hawkeye and Mockingbird make up and she tells Tigra that they should go and speak someone who might help, Jack Russell the Werewolf by Night. Elsewhere Firebird tries to trackdown the demon Master Pandemonium only to be put on the trail of the mystical book known as the Darkhold, which was last known to be in the possession of… you guessed it Jack Russell. 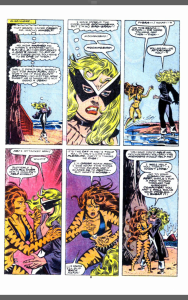 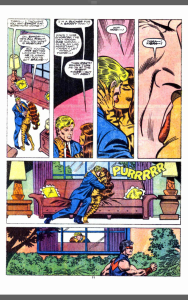 The Avengers end up at Russell’s place and meet his houseguest, former living vampire Michael Morbius (former vampire, not former living) who warns then away since it’s a full moon tonight. They inadvertently ( as you can imagine) let the fully werewolf Jack out and then we get the obligatory fight and they find out afterwards that Jack’s not really going to any help to Tigra. Then Ultron calls his father (Hank Pym) again, but rather than threaten him, he’s quite conciliatory and tells him he wants to bury the hatchet.

Notes: Al Milgrom and Joe Sinnott are not the very best combination, but they do a fair enough job. Everyone looks on model-ish and the action scenes are deftly handled. This is very much a bronze age comic, but it is a very good bronze age comic.

The strengths of this issue are it’s writing. One of the hallmarks of good serialised fiction is the ongoing melodramatic element. It’s why soap operas persist. This issue excels at that feature. The contentious marriage of Hawkeye and Mockingbird, Wonderman’s legal problems, Ultron calling his ‘father’ Hank Pym and Tigra sleeping with both Simon and Hank, not to mention Iron Man wanting some of that action in the creepiest thought balloon in that whole comic. Seriously though, the purring? Last Week I watched the 1966 Batman with my son, there’s a scene near the end on a submarine, where Catwoman was meowing like a real cat and one of Penguin’s goons ‘Bluebird’ had a very WTF look on his face. (BTW watch that film, it’s campy and bonkers fun) But here it’s apparently a turn on? Firebird wants on that team, but with these guys on it, not the best idea.

On a more serious note, the character of Tigra is something that Englehart really goes to town with. Unlike the constantly changed Thing, or the one then the other Jack Russell, Tigra is a blending of cat and lady so she very much has access to her full memory and personality, but has hard-wired impulses and instincts that a very much feline. This leads to impulsive behaviour, particularly in relationship to men. One one scene he’s appalled by her pouncing on Wonderman but later isn’t so worried when Mockingbird offers to help her as she had asked. This is interesting stuff and highlights the strength of these teams books. Tigra isn’t enough to headline her own comic, but shines in this setting as indeed does Hank Pym. The only character that feels less than is Iron Man, who portrayed halfway between elitist ass and horny teenager, but without the nuanced manner that would come later thanks to Robert Downey Jnr.

Overall I really liked this issue and was pleasantly surprised by it’s quality.

Next Time: A family falls apart as the gang gets back together.