O is for Onslaught:

This was a difficult one to pick, not too many characters of note starting with O. Since I tend to favour the unappreciated characters and maligned stories, Onslaught was the best fit here.

Onslaught is what happens when you don’t let s**t go. There’s a Jungian psychology term for the negative or dark side of our personality, the Shadow. The Shadow is the darkness within each of us, the brighter the good, the darker this shadow. Professor Charles Francis Xavier was often seen as a good man, certainly it’s how he viewed himself. Like most of us he had a dark side, but given the powers he possessed and the task he set himself, he kept so much of it locked away. A couple of times he had let slip this darker side (Uncanny X-Men #106 and the X-Men/Micronauts series) blips in the life of a man who mostly had it together. But pressures build and the dam can only hold for so long.

Then two events happened. X-Men #25 was the first, where Magneto horrifically injured Wolverine, by pulling all the metal off his skeleton. In response, Charles wiped Magneto’s mind. But not all of Magneto left, much of his anger, his borderline megalomania and hate followed that power back and joined with all the negative stuff already in Charles’s mind. Onslaught was beginning to form.

Then in X-Men Prime, after the Age of Apocalypse, a young boy was beaten to death simply for being a mutant, right in the heart of Westchester, just down the road from the Xavier Institute. This broke his heart and in that moment Onslaught was born.

Every negative thought and impulse from Magneto and Xavier, manifested as an individual creature, who cut a swath through Xavier’s life, harmed several of his students and the conflict grew to involve the Avengers, the Hulk, the Fantastic Four and others in the bookends of Onslaught:X-Men and Onslaught: Marvel Universe and dozens of tie ins. In the end, Xavier was freed from inside Onslaught who no longer needed a host and Onslaught was defeated, but seemingly at the cost of the non-mutant heroes. The Hulk, the first family and Earth’s Mightiest Heroes, were gone.

It was a marketing thing really, a way of setting up Heroes Reborn, but am I alone in thinking that there was a good idea buried in there? Deep inside this good man was his own personal demon and it found it’s way out. That’s some metaphysical s**t right there. It would have been interesting to see what a different writing team would have done, a Claremont/Simonson or someone like Grant Morrison.

The Onslaught event was world shaking and all that, but it was a clumsy way of exploring the battle within and the consequences on our loved ones, of ever losing that battle. Onslaught has been brought back a couple of times since, one time he was the Red Skull, but in the earlier appearances, held a sense of mystery, power and menace that I remember fondly.

O is for OMAC:

One of the less regarded creations of the King of Comics, Jack Kirby. It was the world that is comic, a view of the future that was disturbing in it’s ideas then and by it’s accuracy now. Buddy Blank was an ordinary guy, connected to the huge satellite Brother Eye and under the direction of the Global Peace Agency, Brother Eye could transform Buddy into the One Man Army Corp or simply OMAC. Kirby did one series and the next was back ups, but that’s not where I found him. 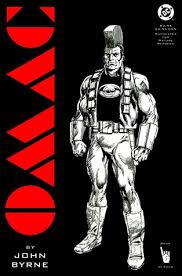 Published in September 1992, OMAC by John Byrne was a heady mix of post apocalyptic dystopia and a mind bending time travel tale. OMAC finds the last of the bad guys he was created to battle, who escapes into the past, the 1920’s to be exact. OMAC follows, but is quickly reverted to Buddy, who knows little of that part of his life and he is trapped in Depression era New York. Buddy creates a life for himself, only be found by the villain ten years later, but by then Brother Eye has followed him.

At a time when I was less keen on the mainstream art of John Byrne, this black and white prestige series showcases his excellent line work and story telling skills. It’s stand alone, exciting and stands up a lot better than most post 1990 works by Byrne and most 90’s miniseries. Well worth tracking down.

O is for Origins and Backstory

For every story there is a beginning, for every hero there is an origin.

Endings are hard from a writing point of view, but beginnings are just as important. Comics primarily use ongoing narratives and are perpetually trapped in the second act. The first being set up a long time ago and the third is put off so that the intellectual property can still be used. The end result is a fixed origin and a constantly expanding narrative history, or back story.  Back story can be expanded upon with retcons.

Origins can fall into three categories, which for me was crystalized by the podcaster who calls himself Trentus Magnus. Canon, tradition and mythos.

Canon is the current version of events, reboots, restarts and reimaginings all can completly change these at a moment’s notice.

Then we have tradition, how things have mostly been. Batman and the Bat cave, Superman’s fortress and what Krypton was like. Incluing ideas like the existence of Superboy. These things were not fundamental to the origin, but are the things we think of as part of that history. These things cause a lot of anger when they are changed, but are not themselves inviolate.

Then we get to the true heart of it, mythos.

The young Bruce Wayne in the alley over his dead parents.

The baby made of clay.

These origin stories have a timeless and mythic quality to them.

O is for Optimus Prime