Synopsis: The Starbrand was written by Jim Shooter, penciled by John Romita Jnr with inks by Al Willliamson and opens with Ken Connell dirt-biking in rural Pennsylvania. After a risky jump, he finds a bomb-site. Shortly afterwards, he is approached by an old mall, all unearthly and cryptic. He does ‘something’ and Ken passes out and in a dream-like state, is told of the ‘Starbrand’. When he wakes, he finds a strange mark on his hand and that he now has super powers. The old man is gone, leaving an alien looking corpse and some brown leather-like clothes.

There’s some testing of those powers and then he goes to see his friend Myron. During his relaying of these bizarre events, an alien attacks and there’s a pitched battle, leaving the alien, Myron’s house and Ken’s clothes all destroyed. Ken goes to see his friend Debbie the Duck, who for reasons that are not in any way addressed quacks at times. It could be assumed that she’s Ken’s girlfriend, only we learn that he’s dating Barbara, single mother of 2 kids. 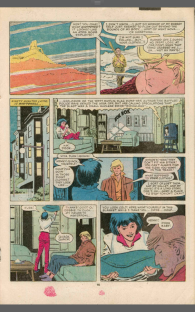 During a ‘date night’ with her, one of the kid, her daughter point the gun the alien had at Ken, somewhat killing the romantic mood that was almost happening. Realising the alien is still around Ken goes looking for it, this time wearing the clothes that were left by the old man. There’s more of a fight this time and it’s decisively won by Ken, who is confident that he is the rightful bearer of the Starbrand.

Notes: Take a seat, get comfy, this could be a while.

The writer of this series is a somewhat controversial figure. A professional comics writer since the age of 14, Jim is a study in contradictions.

Jim Shooter is a visionary, who stewarded Marvel Comics through one it’s greatest eras in both sales and critical acclaim.

Jim Shooter is a tyrannical egomaniac who ruled Marvel with an iron fist and alienated many writers and editors.

Which of the above statements are true? Depending on who you ask, all of them. He had a vision of the Marvel universe that he would see come to the house style of Marvel Comics and many of his ideas were both successful and looked back on fondly by fans. (We are just for now going to ignore Secret Wars II) one of the ideas that didn’t really work out quite so well was his plans to celebrate the 25th anniversary of the founding of the Marvel Universe with a bold new venture, the New Universe.

It was an attempt to modernise the idea of Marvel’s ‘world outside your window’ by stripping away even more of the fantastic elements. There was no Wakanda, no Eternals or Celestials, no Atlantis, no Mutants, no Atilan or any of that. This was a world that could be our’s. It was an idea that was somewhat ahead of it’s time. There were several titles in that line that had potential, but were kind of underwhelming as comics which as a medium lend themselves easily to the fantastic spectacle of the 616 timeline (the main Marvel Universe). The New Universe’s core titles (Kickers Inc, Spitfire and the Troubleshooters, Justice, DP7, Psi-Force, Nightmask, Marc Hazzard: Merc and Starbrand were down to Earth-ish, save for one fantastic element, usually connected to a blinding flash in space, referred to as the White Event. I don’t personally remember any of the titles being particularly good (although anecdotally DP7 is supposed to be worth a look) and sadly, that bears out for this issue too. I’m not particularly a fan of this era’s vintage of John Romita Jnr’s art, but the problems I have with this issue are not really the fairly decent artwork. The look of the brand as a sort of star/asterisk like tattoo is eye-catching and Ken in action is also interesting in appearance with the power looking like it comes from within him, rather than being an external thing. For the time, there’s a lot of good and original stuff going on.

However, this is where the good begins to pull away. Gung-ho lead character in the middle of nowhere gets an alien weapon from a dying pinkish looking alien, who hints at a larger universe? It’s a bit Showcase#20 isn’t it? Sadly though, Ken isn’t as interesting or dynamic a character as Hal Jordan and the old man is not as memorable as Abin Sur. We see lots of fragments of Ken’s life, his mate Myron, his job, his girlfriend Barb and whatever is going on with Debbie (seriously, what’s with the f***ing quacking?) but it honestly lacks anything that approaches interesting or compelling. Issue 1 is to pull you in and make you want to read issue 2, it didn’t do that, in fact, the format of this blog lead me to be grateful I didn’t have to read issue 2. I genuinely wish that I had picked something else for June 1986. Jim Shooter has made great contributions to comics, sadly this was not one of them.

Next Time: Villains assemble as the Avengers are targeted.