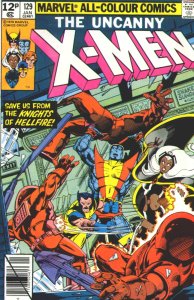 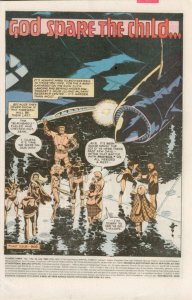 Synopsis: X-Men 129 was written and drawn by the classic team of Austin, Byrne and Claremont and “God Spare the Child” kicked off the Dark Phoenix Saga. It opens on Muir Island, of the coast of Scotland with several of the X-Men preparing to leave for their Westchester home. Present are Dr Moira McTaggart, Jamie (Multiple Man) Madrox and Sean (the currently powerless Banshee) Cassidy, Lorna (Polaris) Dane and Alex (Havok) Summers, who are not going with them. This leave Kurt (Nightcrawler) Wagner, Piotr (Colossus) Rasputin, Wolverine, Ororo (Storm) Monroe, Scott (Cyclops) Summers and his his lady love Jean (Phoenix) Grey who all fly off home. 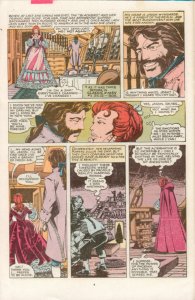 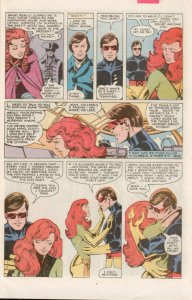 Also flying (albiet in a smaller plane) is Jason Wyndgarde, a man with a fashion sense and a moustache from the mid 18th Century, who has been manipulation Phoenix’s mind, part of which is making it seem like she is reliving moments from the life of one of her ancestors. During one of these events, Jean is brought back to the present by the voice and concerned face of Cyclops. He asks if she is ok and rather than answer that question, she brings up the fact that Cylcops was going out with Colleen Wing. Cyclops points out that Colleen is just a friend (does Colleen know that?) and goes on to tell her that he couldn’t face losing her and so when it looked like he had, he didn’t allow himself to feel anything about it. So denial is not just a river in Egypt. After this delightfully awkward moment, the team arrive at the Xavier’s School and find a returned Charles (Professor X) Xavier, who has returned to re-take his role as X-Men leader. It doesn’t take long for Charles’ school teacher attitude to rub the X-Men up the wrong way as Cyclops has treated the team more like the battle hardened adults that they are and have forged them into an effective team. Charles and Cyclops clash over this, but before they can resolve it,  an alert from their mutant detector Cerebro detects some new mutants, one in New York and one in Illinois. As Charles sends Cyclops, Phoenix and Nightcrawler to New York, he assigns Storm, Wolverine and Colossus to accompany him to Illinois. All of this is seen by the Hellfire Club, who now include Jason Wyngarde. The unseen Shaw tells the White Queen (head of the Massachusetts Academy school, who as a teacher feels that wearing a corset, stockings and knickers under a cloak is perfectly fine) to recruit the mutant in Illinois herself. 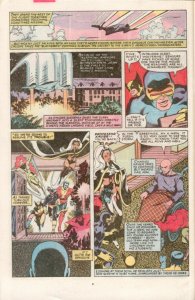 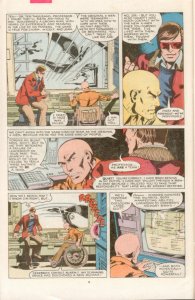 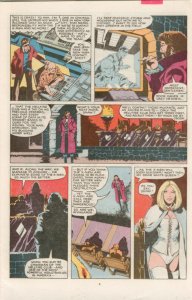 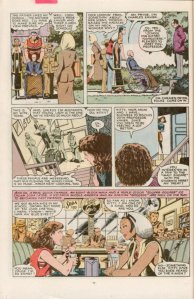 This new mutant in question is 13 1/2 year old Kathryn (Kitty) Pryde, who is watching her mother and father’s marriage disintegrate and is waiting for them to send her to a boarding school. She is also suffering intense headaches and during one after a dance class, she lies on her bed, blacks out and finds herself in the living room, directly under her bed on the lower floor. She narrowly avoids meeting Emma (White Queen) Frost, but does end up meeting the Xavier’s School group, including the huge Colossus, whom she takes an instant interest in. Her father Carmen, suggests that while they talk with Xavier, she and his students go to the ‘malt shop’. 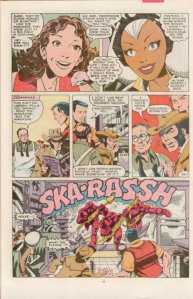 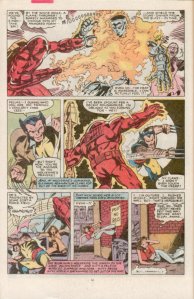 At the shop, Storm and Kitty get to know one another and Storm tells her that they are the X-Men and that Professor Xavier has authorised Storm to tell her. I wonder if that’s because Xavier can be known to be a little mind-wipe happy and therefore there’s no real risk. Storm and Kitty are clearly taken with one another, while Wolverine and Colossus are at the news-stand. At the news-stand Wolverine is checking out the porn. No, seriously the guy from the news-stand actually has to tell him to stop reading penthouse and Wolverine is ready to f**k the guy up over it. Short dude is REALLY into his skin mag. Just before this gets more bloody, the three off-duty X-Men are attacked by men in pink battle armour. Will just leave that there. There is a brief battle, won by the X-Men’s teamwork, but their celebration lasts a second before they are taken down by a mind blast from the White Queen. She brings them aboard a hovercraft and blows up the armoured warriors for their poor showing. In the rear of the hovercraft, Kitty passes through the wall and hides in the back and wonders, what can she do now? 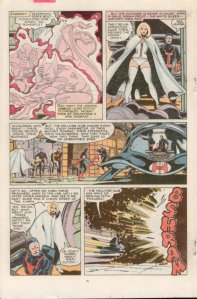 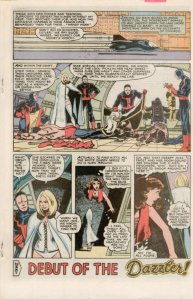 Notes: Ok, before I start, this comic was well covered by the following podcasts,

and the amazing Rachel and Miles X-Plain the X-Men

Both do a better job that I’m going to, so this’ll be quick, check out those podcasts and you’ll be glad you did. All I can say is that this was well constructed, beautifully realised and a fun read. The Dark Phoenix Saga has a legendary status and to be honest, it’s more than earned. This was when the comic went from being a decent bronze age book, to something very special.

Next time: Super heroics and a strip tease.