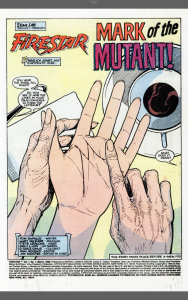 Synopsis: Firestar #1 was written by Tom DeFalco with art by Mary Wilshire and Steve Leialoha and opens with a girl and her grandmother at breakfast. Angelica Jones is having the lines on her hand explained as her being special. This doesn’t go over well with Angelica’s father Bartholomew who is struggling with having to keep moving because of work and doesn’t want Angelica believing in being so special. Angelica goes off to school and we see than her grandmother is very ill.

First day at another new school and Angelica has already earned the wrath of the stereotypical mean girls led by Cassie, who moon over Chuckie, the popular kid. He see’s a lost Angelica and wants to help, this puts her very much in the mean girls leader’s crosshairs.

Miles from there in the Salem Centre area of Westchester at a fairly well known school where young Kitty Pryde of the X-Men is helping Kurt ‘Nightcrawler’ Wagner repair the mutant detecting computer Cerebro under the supervision of the school’s headmaster Professor Charles Xavier. Over in Snow Valley Massachusetts, at the Massachusetts Academy, the headmistress there Emma Frost walks to her private office and sheds her refined and schoolmarm appearance for the lingerie and cape combination of the White Queen. Her mutant detecting device Mutivac is working fine and there seems to be an arms race growing between the Academy and Xavier’s school. 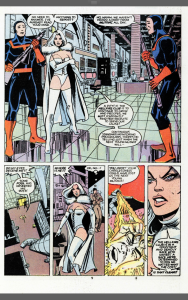 Back at Angelica’s school in New Jersey, she’s not doing so well, with a different cirriculum and a teacher being a dick, she is not feeling any encouragement in class and feels ever more the outcast during lunch thanks to the mean girls. Angry and alone, Angelica shakes her chocolate milk cartoon, her hands are glowing and hot chocolate milk explodes out of it, onto the history teacher, who quickly puts her on detention. This unnatural event is detected by Mutivac and the White Queen is very keen to get this new mutant for her side. But until more events happen, that will have to wait. And so months pass. 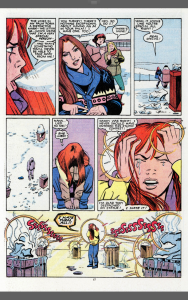 Chuckie is still being nice to Angelica though, even suggesting that she enters the Ice Sculpture competition. She does and that just makes things worse, since Cassie feels left out with Chuckie, who is just trying to be a friend to the new girl. We get to see Grandma get more sick and Cassie destroys Angelica’s statue, Angelica comforts herself with the special M sign on her hand, but Cassie craps over that too, pointing out that she also has the sign as do many people. More mockery ensues. Shown the lies from her family and the pain of her peers, Angelica has another glowing episode and all of the sculptures are instantly melted.

She tries to phone home, but the payphone melts in her hand. Panicked, she heads home and to the safety of home, only to find the ambulance taking her grandmother’s body away. After the funeral Angelica reveals her powers to her father, who doesn’t reacty particularly well, but help is at hand, but this isn’t a happy story, so it’s Emma Frost, the White Queen of the Hellfire Club who gets there first.

Notes: To say this story is unoriginal, or cliché ridden is to say that the Grand Canyon is a hole in the ground. The outsider in school stuff, the tragedy after tragedy and the falling under the spell of the evil villainess it’s all a bit paint-by-numbers.

It is however beautifully done. Wilshire and Leialoha do a great job illustrating this. This is mostly a flashback story to a character that had been in the Uncanny X-Men a year or so earlier after spending her pre comics career as on of Spider-Man’s Amazing Friends, so this is very much a tale of her past. That’s kind of the problem, it’s low stakes and nothing too original to keep you interested, so it comes off all bland and forgettable. A shame to be honest.

Next Time: An epic tale of the frog of thunder.

Stuff in my head – Or goodbye chief