Plot: The clone of Peter stands over an Aunt May he remembers, but knows he doesn’t know. He talks about Chakra’s message and reveals his name to be Ben Reilly, after her maiden name and Peter’s uncle. He talks about having to just wait it out and he can claim a real life, but he remembers most of that life and knows that he can make no other choice other than to try and save Peter. 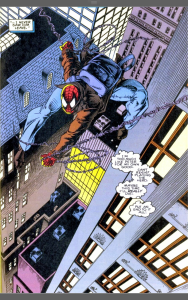 Peter meanwhile is shackled inside the Ravencroft Institute, being studied by Dr Judas Traveller and Mr Nacht, while Boone and Medea await Ben, with Medea under orders not to kill him. Ben arrives dressed in his regular clothes with a Spider-Man masks and gloves. Unprepared for his Spider-Sense, Boone and Medea are no match for a Ben even out of practice of using his powers. 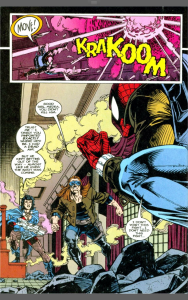 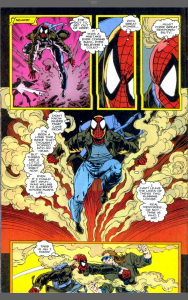 Elsewhere, Peter is hallucinating old villains and his unmasked self and through this dream-state is reminded that with great power comes great responsibility. He comes to, with his madness behind him, he bursts through his shackles and attacks Traveller. Things aren’t going well with that, until Ben arrives to tell Traveller that he is taking Peter out of there. 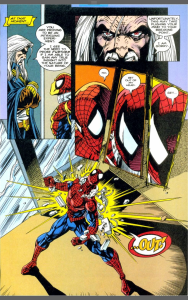 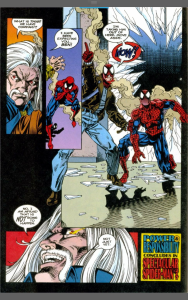 Notes: Whilst part 2 was definitely Peter’s story, this issue was very much the clone’s. The clone, or as he’ll henceforth be referred to as Ben. Clearly seen here is his inferiority complex and his pain at being exiled from what he remembers as his own life, but fully aware that it’s not. Of course he goes after Peter, because that’s what Peter would have done.

His battle with Boone and Medea is long but highlights how Ben is not the experienced Spider-Man that Peter is, but can hold his own. His 11th hour arrival is a very Spider-Man thing and just like Peter, as a reader, hope starts to come forth Mackie does a great job waving the Peter and Ben stories together and the dream/hallucination as way to bring Peter out of the darkness that the ‘Spider’ leaves him in is a lovely touch in an issue swimming in them.

That said Tom Lyle deserves a good deal of credit too, along with Scott Hannah. They nail each scene and add character to the bland Boone and Medea. The panel progression and action sequences highlight what a hidden gem Tom Lyle is.

The first part got me interested, the second entertained me, but this is the issue that hooked me. Now I can’t wait for part four.

Next Time: Heartto hearts at the end of the world.