Plot: Sinister Neglect opens with Artemis, Pyro, Rictor, Newt and Phantazia escaping from the genetic experimentation pens of New York City, the stronghold of America’s ruler Apocalypse. The escapees are soon cornered by members of the Elite Mutant Force, including Aurora, Northstar, Havok and their field leader Cyclops. 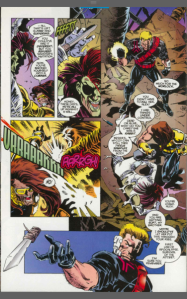 The runaways do their best, but are no match for the EMF. Rictor is immediately killed and the others brutalised. Cyclops tries to show restraint, but he is alone in this as it is seen as weakness, highlighted when Havok kills Artemis, before she can use a hidden knife on Cyclops. The pair bicker over this as Newt, Phantazia and Pyro are returned to the pens to be used as the building blocks and raw material to create Apocalypse’s troops the Infinites. Meanwhile the man who runs the pens, Sinister is plotting.

Cyclops confronts the Guthries, Sam and Elizabeth over their failure in security, while Havok goes to Beast to discuss Havok’s ascension to leader after Cyclops is ‘removed’ from office. As Cyclops heads to see Sinister, he comes across the Bedlam Brothers Jesse and Terry, who are good-naturedly fighting with one another. They invite him to the nightclub Heaven, but Cyclops is on a mission and will not be deterred. 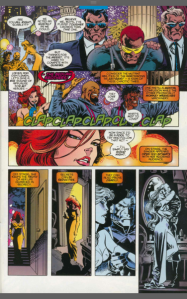 At the aforementioned nightclub, Havok stops by and asks questions of Angel, but really he’s there to see Scarlett, who starts singing, only for her performance to be interrupted by the human terrorist Henry Peter Gyrich. With the assistance of Terry and Jesse, Gyrich’s mind and machinery respectively malfunction and he is restrained with ease. Scarlett heads backstage, to meet her lover Havok.

Later that night, Havok and the Bedlam Brothers return, met by Cyclops who asks Terry to get past Sinister’s ‘brain in a globe’ gatekeeper and the four get into Sinister’s main lab/office. Inside,they find nothing but destroyed equipment, Sinister is gone. Seeing the chaos that can come of that kind of power vacuum, Cyclops takes command of the pens completely and elsewhere the statue of Apocalypse that replaced the Statue of Liberty is destroyed by a bomb set by Sinister.

Notes: Of the8 mini-series of this event, this is the only one that’s really from the villains’ side of the street. There are no heroes here, but it’s an interesting look at the motivations of the people who are part of the infrastructure of Apocalypse’s empire. We have the zealous Guthries and Alex, who enjoy the freedom to be brutal and revel in the horror they are permitted to inflict. We also see the Bedlam Bros, who are just working for the people who are in charge and aren’t bad guys really, but just people doing the job of keeping the peace. The Dark Beast doesn’t care about the politics or who’s in charge, but just wants to do his experimenting in peace, making him the most terrifying and closest version to the Beast we have got since 1963. We are clearly meant to see Cyclops as the protagonist, he is also fairly close to his pre-AoA self, being orphaned and manipulated by Sinister, but in this case, he was raised by him and adopts the Mutant Supremacy thing quite comfortably. Cyclops is always the leader, but never for his own cause, only the strongest he was exposed to. In the main universe, it was Professor-X’s ideals, here it’s Sinister’s and that’s the only difference. He’s a good man, working for the bad ones. He uses only the  amount of force he needs, wants the experiments done away with, because he believes in peace with the humans and has no time for the sloppy savagery that everyone else feels is appropriate for what they do. Meaning apart from some cosmetic things and a twist of ideology, Cyclops is still Cyclops.

John Francis Moore is not the most exciting writer of this era, but he does well with this status quo and shows clearly the difference in the characters motives and reasons really well. He sets up the sibling rivalry with Havok and Cyclops page by page and you always get the idea that Havok would prefer to be an only child. The whole issue is narrated by Sinister, whose absence is a character as well as anyone else. He plays the whole detached schemer, but you do get the impression that he cares for his boys, Scott in particular. It’s a humanising moment for the most glam Horseman. It establishes well what this story is about and tells it quite artfully.

The art is handled by the workman-like Al Milgrom’s inks over the pencils of Steve Epting. When this comic came out, I was not a fan of Epting’s scratchy style, but I’ve come to appreciate it more and see that it favours the moody story with a mix of noir and sci-fi that is perfect for Factor-X. His Cyclops looks permanently conflicted, but the body language is all resolute and stern, a mix that most artists wouldn’t have been able to portray.

In the end, this is a solid story, full of interesting ideas and characters that are familiar enough to make the differences both startling and yet understandable.

Writing: Solid characterisation and good use of rising tension. 4/5

Art: Moody and well laid out, this is decent art from an underappreciated artistic team. 3/5

Overall: One of the better parts of the Age of Apocalypse is this gem of a series and it’s version of Cyclops. I actually have the HeroClix piece of AoA Cyclops on my desk at work, I have never played  HeroClix, but I wanted that figure, so that tells you all you need to know there. 7/10.

Next Time: Scarlet Spider vs Venom part 3, Symbiotes doctors and clones, oh my!