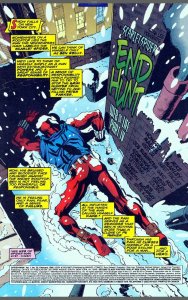 Plot: The Scarlet Spider lies in the snow on a rooftop as several blocks away, Grim Hunter and Kaine battle.  Elsewhere Dr Seward Trainor arrives back in New York looking for his friend, that same Scarlet Spider. 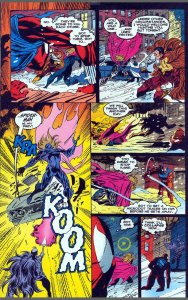 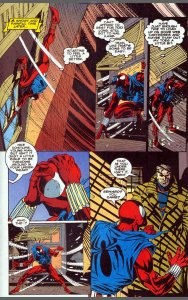 Scarlet Spider gets to the battling pair, but the Grim Hunter leaves, only interested in Spider-Man and not Kaine or the Scarlet Spider. Kaine also leaves, unhappy with being drawn into conflict ahead of his plans. Scarlet Spider returns to his apartment and finds Seward waiting for him. He pulls off his mask revealing himself as Seward’s friend Ben.

Elsewhere Kaine is having visions, future images of the murder of Mary Jane Watson-Parker and feels an urge to prevent this from happening. He stalks the Grim Hunter, who realises that he is being stalked, plans for this. 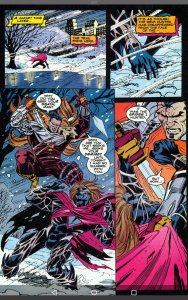 In the park, the pair battle. Shortly after this, Scarlet Spider arrives and tries to break up the fight, focusing mostly on Kaine. This goes as well as you imagined it would go, badly. Once again Kaine and the Grim Hunter escape as Scarlet Spider gets dunked into a lake.

Kaine finds Grim Hunter and with very little effort kills him, leaving his face marked with a similar veiny pattern from Kaine’s costume. The Grim Hunter crawls off to die in the arms of a distraught Gregor, who in his grief, hungers for vengeance.

Notes: This is a bit of a damp squib of an ending, it suffers the plot weakness of Raiders of the Lost Ark, in that the lead character doesn’t really change anything. Ben Reilly doesn’t at any point make any contribution to the plot, beyond talking to Seward. The battle between Kaine and the Grim Hunter takes up most of the issue, split into three different set pieces, but really is not very interesting at all. Kaine has yet to fulfil any of his promise and I genuinely couldn’t care less about the Grim Hunter, who seems to be Kraven, without any of the pathos that Kraven an interesting character at the end. His death is almost throwaway and I would be surprised if nothing happens as a result. The one thing I did like was Kaine’s visions which seem to imply a deeper motivation that adds the promise of depth to this thinly written character.

Art: 2 out of 5. Manley is quite capable, but really lacks any flash to make this mediocre story worth looking at. The action scenes don’t pop and since they are the majority of the story, that’s kind of a big problem. The only reason he gets two is that Kaine and Scarlet Spider do stay consistent and with their costumes, that’s nice to see. That’s not really enough though is it?

Writing: 1 out of 5- The plot is essentially three boring fight scenes with some connective tissue and to be honest it’s so much thinner than paper-thin. It was the complete opposite of what was needed here.

Overall 3 out of 10: It was a boring end to a boring story that was so bad, the regular artists couldn’t have saved, but weren’t there anyway. Web of Life could have been a fast-paced two-parter followed by some purely character-based issues, but it had to match what was happening with the other two ongoings, to the story’s detriment. Am glad to be through it and onto something hopefully better.

Right, where are we?