Synopsis: The clone saga is over, the Jackal and the clone of Spider-Man is dead. Gwen Stacy’s clone has left town and Peter is back with Mary Jane. All should be well ( or at least as well as Pete’s life gets) but there was a comment in the last issue from Gwen’s clone about how does Pete know he is Pete and not the Spider-Man clone. This simple thought is driving him mad. He leaves home as Spider-Man and heads for the New York lab of Curt Connors, an old friend of Spider-Man, who was once the Lizard. Elsewhere, someone sees this happen on screen. Turns out Curt is there and Spider-Man asks for his help to prove one way or the other, is he him, or a copy, who thinks he’s him.

Tests of several types are performed and Curt tells him that it’ll be several more hours before the results are ready, so Spider-Man puts his head down. Then the Vulture appears outside the window and calls Spider-Man out. Rather than ignoring the elderly thief, Spider-Man heads out and a brief battle ensues, it’s ended when Vulture dive-bombs into the roof of a nearby building but explodes on impact. 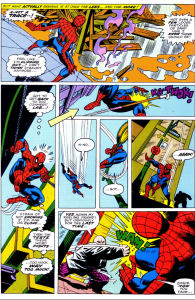 On the same roof, Sandman attacks again, another brief battle and an exploding villain, then another with the Kingpin involved. Each fight wearing Spider-Man down. But that was the plan of Professor Smyth and his Spider-Slayer as he arrives to finish Spider-Man after monologue-ing his whole plan. 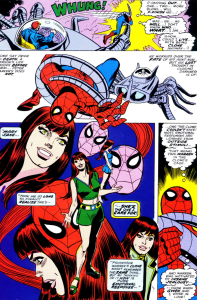 Exhausted through the fights and the existential crisis Spider-Man is on the verge of giving up and then, he thinks about Mary Jane. Realising his love for her proves he isn’t the clone, who would be more in love with Gwen, he finds the strength to beat the robot and clobber Smythe before heading back to Connors’ lab and throwing the results of the test away, he knows who he is, he has his answer. 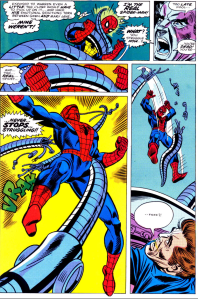 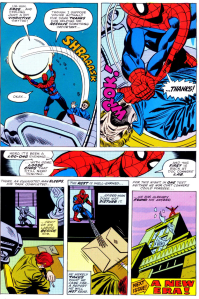 Notes: This was the aftermath of the first clone saga, which answered the question, how does Spider-Man know he is Spider-Man. Archie Goodwin writes a decently paced story, with a lot of introspection and banter, very Spider-Man and Gil Kane brings the art, which apart from the up the nostril shots (Seriously Gil, what’s with the nostril fetish?) is great 70’s Spidey stuff. It was great to see Curt Connors, even better since this wasn’t a Lizard story and the Spider-Slayer was a refreshing change for a villain to use in this sort of story, he’s no world-beater, but here he was a genuine threat to body and mind here and the robot duplicates were a nice way to have multiple villains. How the story is told is competently while Goodwin and Kane are a B-Team for this era (hard to compete with Conway and Andru as a creative team) they are still really good and tell the story in an exciting and fun way.

The story itself is another matter. Spider-Man concludes he is the original because a person with EXACTLY the same personality and EXACTLY the same memories (remember the last issue) would feel differently about someone they would both know. He’s supposed to be a genius but is perfectly fine with that massive jump in logic. Then again, without that moment of a SCIENTIST thinking that he doesn’t really need evidence or any of that bollocks, there wouldn’t be room for the second clone saga and I wouldn’t be reading this, or writing about it now, so swings and roundabouts.

Overall 8 out of 10, despite its failing it’s a fantastic Spider-Man story.

Next Time: We jump nearly20 years in the future and start getting 90’s on this