The Prelude, to the prelude of the Age of Apocalypse 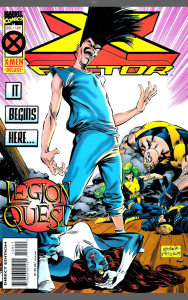 X-Factor 109 was cover dated December 1994 and was on sale in October 1994, sharing the spinner racks with Backlash 1, Bishop 1, Giant Sized Prototype 1 and Venom Seperation Anxiety #1. 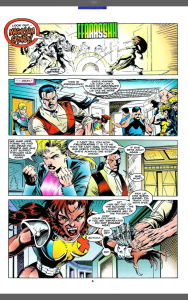 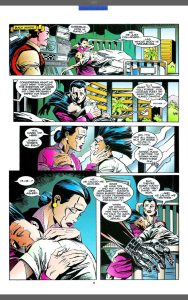 Plot: Legion is awake. Mystique has been looking for him, since he killed her love Irene ‘Destiny’ Adler under the influence of one of his other personalities. Now, here in a hospital in Tel Aviv, this is a David Haller who is awake, lucid and whole for the first time in years. Unable to kill him as planned and pursued by Wolfsbane and Val Cooper, then shortly after by Strong Guy, Polaris and Havok. Meanwhile Gabrielle Haller holds her son, who for the first time since he was 10, recognises her. David falls back to sleep and dreams of Destiny, his guilt over her death is pushing him towards a path to remake reality. As his mother listens to him talking in his sleep, he seems to also be talking to his father Charles Xavier. He then leaves whilst Gabrielle is talking to Forge.

At Tel Aviv Marina, Mystique catches up with her former colleague Avalance, just as Val Cooper and X-Factor arrive. This causes a battle between the two sides, Avalanche causes a tidal wave, which is held back by Havok. Mystique uses this distraction to escape, only to be found by Wolfsbane, who fights with her, but doesn’t win. She does by enough time for Forge to arrive. Forge’s abandoning of Destiny years earlier is what gave Legion to chance to kill Destiny, so Mystique blames him to and the pair battle, only for the fight to be stopped by David’s arrival. David tries to talk to Mystique and this conversation includes fulfilling the promise to tell her that Destiny loved her. This psychic conversation leaves Mystique drained and then David turns his attention to X-Factor, whom he sends somewhere else and then flies off, exclaiming that he will fix everything.

Ok, lets get some good out of the way, Mystique’s quest for vengeance is handled fairly well and her lashing out at anyone connected to , or protecting Legion makes a lot of sense, her love for Destiny is not made explicit, but is clear as anything. Legion being whole again is also handled well, his sense of guilt for the wrongs he did when unwell and his mother’s joy at seeing him whole are great and the art shows a very unusual looking Legion, all weird expressions and gawkiness. The whole premise of the story screams potential and drama and is at times gripping.

But the bad, oh dear…I mentioned the weird expressions and gawkiness in Legion’s face, this comes from a very inconsistent art. Only a couple of characters are drawn the same from page to page and the posing is horrifically 90’s. The plot is hindered at times by the clunky dialogue and the faux-Claremontian style captions. The story isn’t best served by the script or art and it’s something of a shame that this is how Legion Quest begins.

Writing: 2 out of 5 (Interesting story, hampered by less than stellar scripting.)