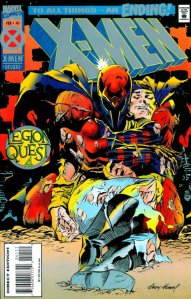 Plot: Their memories restored, the time displaced X-Men try to stop Legion from killing Erik Magnus in the sky above Haifa in Israel. Charles Xavier and his patient/girlfriend/impending malpractice suit Gabrielle are watching powerful mutants battle overhead. Charles has imagined and theorised this, but it’s a very different thing watching it unfold above him. Psylocke contacts Charles, who in order to join them puts Gabrielle to sleep to ‘save her’. He meets Storm and recognises her as the child who picked his pocket in Cairo earlier that year. She was a child and recognises Storm as being from the future. 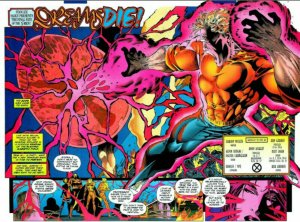 In the present, the older Charles Xavier learns of the crystallisation of the universe and said universe’s impending doom. He is comforted by Lilandra using some kind of holographic version of FaceTime. Gambit and Rogue grow closer as they identify with the chased nature of Charles and Lilandra’s love, they too are unable to touch one another. Archangel flies over to Cyclops and Phoenix to watch the universe ending wave, grow closer. 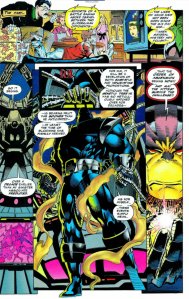 In the past, Apocalypse sees it’s time for his ascension, earlier than his Sinister associate predicted and the whole scene has a foreboding air about it. Legion battles Erik, blaming him for Charles’ failures, both of his dream and his parenting. Erik is years from becoming Magneto and has no idea what Legion is talking about. 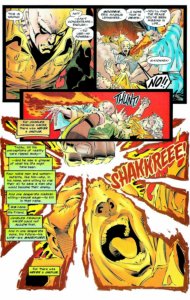 The X-Men wade into the battle and even with Iceman’s powers expanded beyond anything he has used before, they are no match for a near omega level mutant, who after all their efforts stands before Magneto with a psychic blade formed in his clenched hand. The only person left to stop him is Charles Xavier, who takes the life ending shot to the head, dying instantly. Killed by a son, he has yet to conceive, in front of X-Men who he has yet to meet, battling for a dream that he hasn’t imagined, to save an enemy who is still his best friend. So there was no Professor X, no Legion and no X-Men. In the present the wave finally reaches Earth. Gambit realising that there is no tomorrow kisses Rogue as the world finally ends.

Notes: I will get this out of the way, I don’t like the art of Andy Kubert at this time. Kubert sacrifices posing and clarity for his own style and bombastic display. The colours are striking, but like the inks don’t really help. The art is a let down, but the writing is left to do some heavy lifting. The story of the battle of Haifa is the crescendo this story was aiming for. The time lost X-Men, Erik Magnus, Xavier, Gabrielle and their yet to be conceived son all collide as the immortal tyrant Apocalypse watches. It highlights the good parts of Charles Xavier, who selflessly puts himself between Erik and harm and also the high level dickery where he puts his girlfriend to sleep to ‘save her’. The time travel/paradox of the plot adds to the impossible feel to it all and whets the appetite for whatever outlandish s**t comes next.

A less than stellar start, but cooler stuff is on it’s way.

Next Time: Clones and inappropriate teacher student relations as we get into the origin of Ben Reilly.