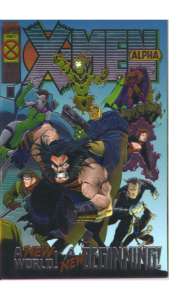 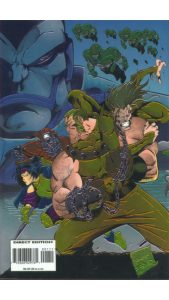 Cast: No, there’s just too many, will just do a full cast on the relevant mini-series.

Plot: This is not the world we know, it is Age of Apocalypse. 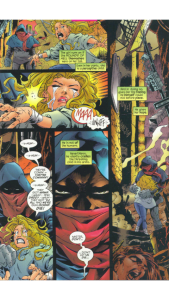 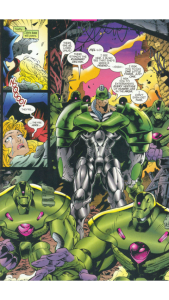 A middle aged man wanders the devastated wasteland that was once Seattle, a different Seattle than we’ve ever seen before. He’s ran into by a young girl, tearfully  fleeing for her life from the mutant soldiers known as the Infinites and their leader Prelate Unus. The girl hides behind the stranger, who Unus learns is also a mutant. He demands that the Infinites kill him, but that’s stopped by the timely arrival of the X-Men and their founder and leader Magneto. 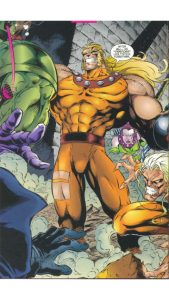 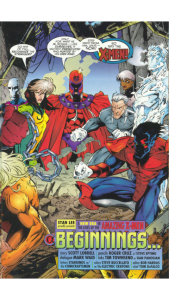 This is not a team we known either, in look or in lineup. This team of Sabretooth, Wildchild, Blink, Morph, Rogue, Quicksilver, Storm, Iceman and Nightcrawler face off against the Infinites, who don’t fare too well against this savage group. They all fall and Unus, who points a gun loaded with non-ferrous bullets at Magneto is flash-frozen by Iceman. The victorious team face the stranger, who is revealed to be the Lucas Bishop who was lost in time when Xavier died 20 years earlier. When he sees Magneto, he launches at him, full of rage, only to be brought down by Magneto stopping the blood flow to his brain for a brief second. 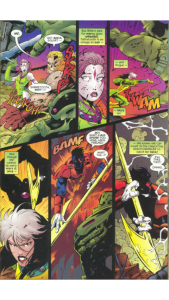 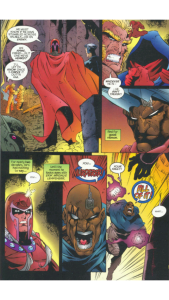 Elsewhere, Henry McCoy, the Dark Beast of the Pens is experimenting on Fred ‘the Blob’ Dukes, who escapes his bonds and attacks his tormentor. Beast is saved by Prelate Alex ‘Havoc’ Summers, who in turn is saved by Alex’s brother Scott. This long hair version has only one eye and has zero f**ks to give. He demands that Beast knock off what he is doing. Alex bickers with his brother, till both are forced into neutral corners by their adoptive father Sinister. Sinister takes Scott aside and they walk and talk and Sinister cryptically suggests that he is about to leave. 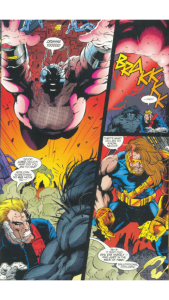 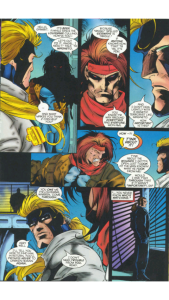 In the nightclub Heaven, Warrington Worthington III, the Angel, hosts guests at his club and introduces the singer Scarlett, before meeting with Gambit, to help take him to Magneto, so I’m guessing Heaven is Rick’s Cafe American from Casablanca. 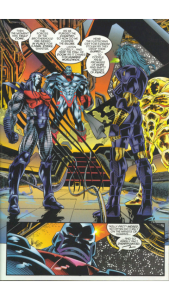 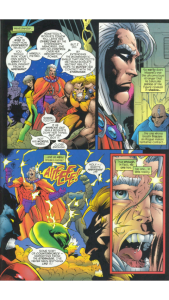 Magneto and his team are in Westchester New York, where Rogue meets with the robot Nanny, who is looking after her’s and Magneto’s son Charles. Mother and son spend time together, then Magneto arrives and there’s a lovely family moment together. The parents have a conversation about Rogue wanting to be able to touch her son, paining  her, that the only person who can survive her touch is Magneto. The rest of the X-Men are questioning Bishop, but Magneto realises that the only person who can find out what is inside Bishop’s head is Rogue.

At yet another location, Apocalypse meets with three of his Horsemen, his son Holocaust, Abyss and Sinister. Another Horseman (Mikhail) is mentioned, but not present and Apocalypse talks of his plan to cleanse the rest of the world of human beings. Sinister quietly laments about his plans regarding sending information to the Human Council in Europe, using a pair of couriers.  In London, those couriers (Weapon-X and Jean Grey) smuggle that information to Moira Trask as back in the US, Sinister realises it’s time to depart.

Back in Westchester, Rogue uses her powers to channel Bishop’s mind, through Magneto and the three of them get a look into the reality that would have been had Legion not killed Charles Xavier back in X-Men 41. The dangerous contact is broken by an arriving Gambit, but it’s clear that what he did see, has shaken Magneto to his core. Nightcrawler is sent to find his own mother and the air is heavy with the sense of impending doom. Magneto has to act, in the name of a man who died years ago and in deep space, waves of crystal begin moving their way towards the Earth. 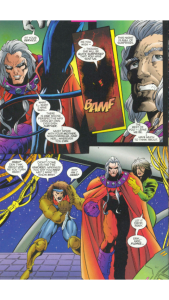 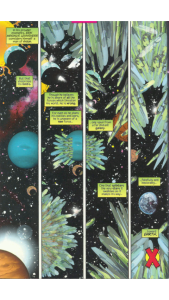 Notes: Wow. There is no doubt at all in which decade this story comes from. It’s like all of the tropes and excesses of the 90’s were thrown into a blender, blitzed at high speed and poured over ever page of this comic. If you hated 90’s comics, run away now.

The art and writing are games of two halves. In terms of art, we have the individual issue’s art and the overall look  of the Age of Apocalypse. In terms of the writing, we have plot and script being handled by two very different creators.

The plot, well what there is of one. There are several set ups and jumping off points, but not really an overall cohesive story. This is really an opening chapter, rather than a single issue comic in and of itself. We’re shown lots of different and interesting places and characters that are both familiar and yet so very different. We have Logan and Jean Grey as lovers, an Angel that has never been blue and Cyclops is a bad guy. Sabretooth is even an X-Man here. Several plots are hinted at, but very little actually happens here. This puts a lot of the writing pressure on the guy doing the dialogue.

Fortunately Mark Waid is up to the task. His words adds some much needed depth to these new variations. His Apocalypse is just as scenery chewy as before, but this is a man who has already won. His Sinister is desperate and his Cyclops is on the villains’ team. But it sort of makes sense, because Waid hit’s the right notes. Cyclops in the main timeline is a man who was taken in by a father figure and committed himself absolutely to that man’s vision and ideology, here he’s no different, but Sinister got to him instead and his were the ideals that Scott embraced. He’s the bad guy, because he really doesn’t think of himself as the bad guy. Rogue is a devoted wife and mother and her pain regarding her powers is being denied physical contact with her son. Magneto, her husband is something of a revelation here. Without having been reduced in age and then restored by the Shi’ar space bondage viking Eric the Red, Magneto never had his youth restored, so this is a sombre and world weary Magneto who has devoted his life to the dream of a man he lost 20 years ago, but will never quit on that dream. So this is a quieter man, who also never had the silver age lunacy that fired his blood either. He’s haunted, both by what he has seen and who he has lost. In an editorially mandated crossover lacking any Waid’s dialogue adds unexpected and very welcome depth.

The art is very stylised, the overly muscled bodies, the odd anatomical proportions and other flourishes are very much 90’s tropes that have dated this comic beyond any adverts that were in it. Truth is, Roger Cruz handles layouts and panel progression really well and he is consistent enough that every character is recognisable as themselves even in this new universe.

Well, let’s just acknowledge the 40 ton elephant in the room. The look of the Age of Apocalypse. Everywhere looks appropriately post-apocalyptic, but the main characters all have a luck that is glam as f**k. The shoulder pads, the riveted collars (where did THAT come from?), the facial buttress/head stocking things and the abundance of facial tattoos, seriously though, the face tattoos?!?

But with all of that, is it any good?

Yes because it’s like a teaser trailer it’s unsatisfying in and of itself, but it whets your appetite for the larger story. (All 42 parts of it to come.)

Next time: The Saga continues as an exile returns.

2 thoughts on “X-Men Alpha – What’s with the face tattoos?” 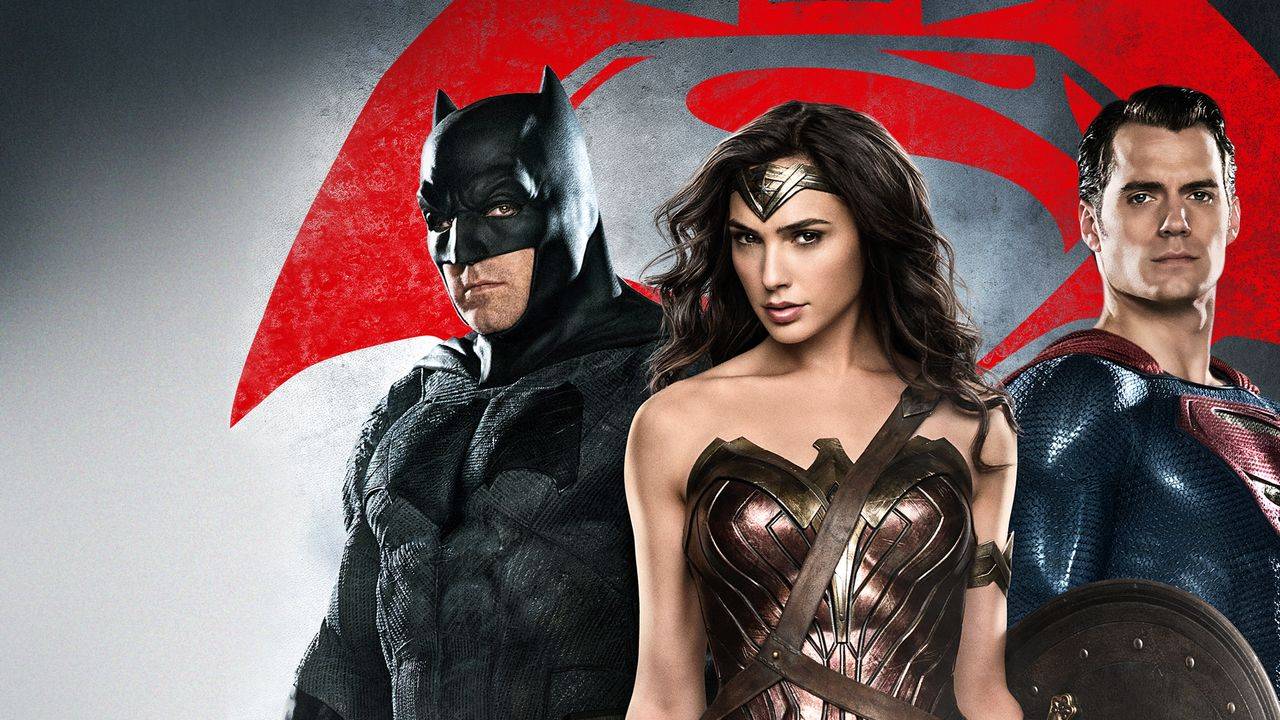