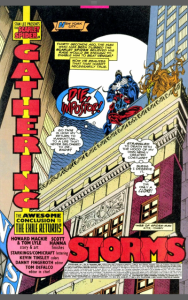 Credits: Written by Howard Mackie, pencils by Tom Lyle with Scott Hanna on finishes and edited by Danny Fingeroth.

Plot: Venom chokes the faux Spider-Man Ben Reilly, until he punches over several rooftops after deciding not to let Venom kill him. Elsewhere Ken Ellis is working late at his job at the Daily Bugle and is interrupted by publisher J.Jonah Jameson, who gives him advice about not being obsessed by the story. This is advice almost immediately ignored by Ellis. Back at the fight, Ben uses his new impact webbing to slow Venom down. Somewhere else again, the son of Kraven the Hunter is vowing at his father’s grave that he will gain revenge against Spider-Man. Salt Lake City Utah and a Detective Raven is shown photos of a New York crime scene that matches a cold case from two years ago, a case he has been on ever since. Back in New York and Gavin Thorpe has returned, killed his younger brother and re-established his control over their ‘organisation’ he asks for information on all the obstacles to his new prosperity, policemen, DA’s and also Spider-Man.

Venom breaks out of the impact webbing and attacks Ben again, but Ben has a plan. He fires his impact webbing between the symbiote and it’s host Eddie and it expands, seperating the pair, leaving Eddie vunerable to Ben’s Stingers, which are fired into Eddie’s face, giving Ben the opening to knock him back with a right cross, quickly followed by series of kicks and punches. All this is observed by Kaine, who it’s clear has history with Ben and not a good one. Kaine watches Ben bring Eddie downand then knock away the symbiote who recognises how familiar Ben is.

Ben collapses after the fight. The Guardsmen (prison guards at the supervillain prison known as the Vault) arrive and take both parts of Venom into custody, intending to keep them seperate this time. They thank the Scarlet Spider for his help. He swings off, feeling positive about the idea of building a life for himself in New York, blissfully unaware of the forces gathering to oppose him.

Notes: This is the end of the first arc of the Scarlet Spider’s story and it ends pretty well. It showcases a lot of Spider-Man’s strengths as a hero, his determination, his stubborn refusal to quit and his brains. Using impact webbing and stingers to disable a significant threat to the original Spider-Man, Ben is able to prove to himself that he can do this, as well as ending a threat to the city that the original either couldn’t or wouldn’t do.

We also get hints of upcoming problems with Ken Ellis obsessing with using the Scarlet Spider to further his career. We also get the rise of Gavin Thorpe, the mystery of Detective Raven’s cold case, a second Kraven the Hunter and the mysterious Kaine. So we’re given reason to believe that this upbeat and optimistic tone is unlikely to last.

We are left with a series of questions, how is Ben funding his time in New York? Why didn’t the Guardsmen or indeed anyone else, unmask Ben when he collapsed? What the hell is Kaine’s costume supposed to look like? The biggest of all being, what happened to the female symbiote creature? At the start of the issue, she is on the rooftop and then isn’t seen or mentioned again. So is she dead? Was she taken somewhere? Is she at the hospital? What the hell? It felt like Howard Mackie just sort of forgot about her and Tom Lyle put her in the comic to match the previous issue and both lost interest in her after that point.

Writing: 3 out of 5 Whilst the dialogue is clunky and plot contrived, the story was engaging with the exception of the unnamed symbiote creature completely vanishing from the plot. I enjoyed the use of 1-2 page vignettes to foreshadow new stories, which acted as filler in a thinner than preferable story. I liked how everthing was laid out and it indeed felt very Spider-Man, whilst it was still very clear that this wasn’t Spider-Man. Ben’s existential crisis leading him from going near suicidal to indomitable, while a bit ham-fisted was ultimately a believable moment.

Art: 4 out of 5 Whilst the heavy inks and garish colour palette don’t do this story many favours, Tom Lyle is consistent and shows a great flow in panel progression, so we get a comic that looks good and tells the story well enough to make the whole issue work and brings the four parter to a satisfying conclusion.

Overall: 7 out of 10 It was always going to be tricky to establish Ben as a lead in his own right, too similar to Peter and it’s pointless, too different and the character doesn’t work. This works somewhere in the middle and using a more recently created villain makes it a fantastic fresh start. With subplts, lots of action and happy ending that kind of isn’t, it was a good start to the career of the Scarlet Spider.

Next time: Spider-Man/Daredevil vs Vulture/Owl round 2 with a less happy ending.