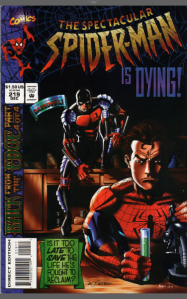 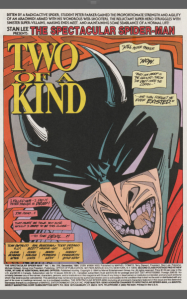 Plot: Spider-Man is dying. Poisoned by the virus stolen by the Vulture and delivered by the Vulture’s army of birds (yes, you read that right) he collapses in front of Daredevil, but is able to web the birds up, to prevent more people from being poisoned, he is also able to throw a spider-tracer on the Owl’s foot. 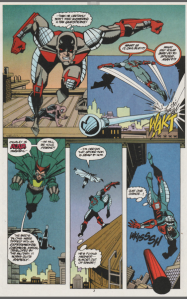 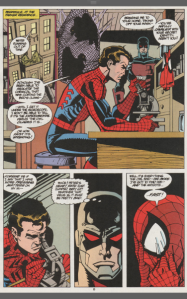 Elsewhere, Mary Jane visits her estranged father. They talk about his writing and it’s all perfectly civil, but MJ goes berserk after seeing a picture of her mother on his desk, whose death MJ blames on her father. He breaks down in front of her, full of shame and regret and the pair begin to reconcile.

At their shared hideout, Vulture tries to convince the Owl that his plan to murder everyone who know’s either Vulture or Owl is a good one and it is already underway as an old business adversary of the Owl’s has already been poisoned but Owl can save him, if he so chooses.

At Pete’s apartment he has taken off his mask and is analysing his blood as Daredevil waits to see what Spider-Man will do next. Peter panics, he realises that he needs to find their bird-themed adversaries. One of which, the Owl is watching an old enemy die, as Vulture had told him that he could save him, his indecision makes the choice for him. 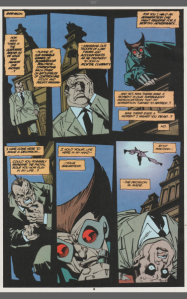 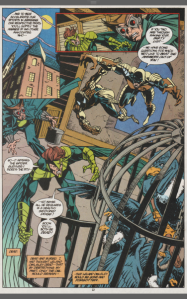 Daredevil and Spider-Man race towards the Owl, following the tracer, Spider-Man is growing more and more sick. After losing the signal, Daredevil steps in and locates the Vulture’s lair.  The pair crash in and battle the birds, but Vulture and the Owl escape, but not before giving Spider-Man the antidote that was meant for Greyson. In the aftermath, Daredevil offers Spider-Man the advice of rising above his problems and rebuild his life around the things that matter to him. 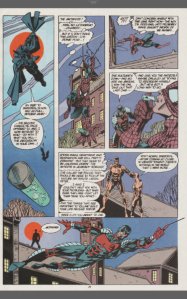 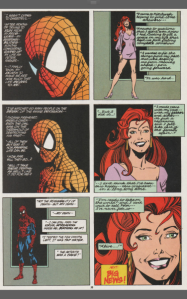 Mary Jane, after making peace with much of her past, feels alive and optimistic, while Peter realises that the antidote was simply tap water, after all that, he’s still dying.

Notes: As part of my collection of tat, I have an action figure of the 90’s armoured Daredevil. Sadly that bit of  ornamentation is the only really positive thought I had about this issue’s main plot. The character building with Mary Jane was great, watching her cycle through her anger, love and shame relating to her father fleshed out a character that I had little time for back in the 90’s. But the thing is, this is a Spider-Man comic, so he should be the most interesting thing in it. Neither he, nor is plot are. The team up of Vulture and the Owl has neither dramatic tension, nor an interesting hook and it just signposts how uninteresting the Vulture is, whilst the more complex the Owl is a little underserved by the story.  Daredevil is even less plot relevant in this issue and whose ‘listening to the city’ gimmick feels wasted in a story that has so little in the way of stakes.

When I first read this issue back in the day, I was less than enthused with Sal Buscema’s pencils, but m appreciation of him has grown, having seen more of his vast body of work and here the weakness in the art is more to do with inks and colours than the pencils which are kind of the highlight of this comic. The layouts and figurework is really solid, the mark of a dependable draftsman who could always produce high quality work to a deadline, telling a good story and at this point in comics, that’s a bit of a rarity. The art is the strength of the issue, not it’s weakness. The ‘Back from the Edge’ story had a strong start and a promising middle, but is let down by this ending. The only bit of drama is the fact that as the issue ends, Peter is dying, just as he is trying to reconnect to life.

Writing: 2 out of 5 The Mary Jane stuff is clunky, but affecting, whilst the rest lacks any sense of stakes. We are told at the end, the lead is dying but are given no reason to really care.

Art: 3 out of 5 Solid pencils, let down by lacklustre inks and washed out colours, draining the action out of the action scenes.

Overall: 5 out of 10 A disappointing end to a good story, but it leaves and interesting path for the title to go down.

Next time: Back to the Age of Apocalypse and the Next Generation.