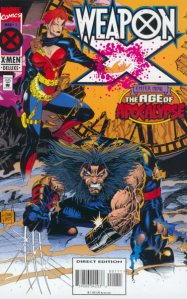 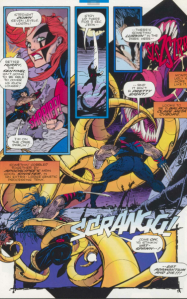 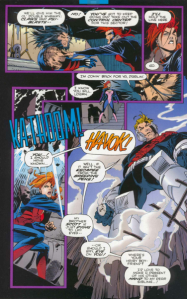 Plot: The east coast of Apocalypse’s America and there are Sentinels incoming. The human population of Europe is preparing to evacuate the oppressed humans of America. On one of the Sentinels are Logan and his love Jean Grey who are there to destroy the control sector for a section of the border wall. Very quickly into this savage attack, the Infinites manning the wall realise how out of their depth they are and call for help and are sent Factor-X’s Havok. He attacks the pair, who manage to hold him off long enough to escape, leaving him merged on a molecular level with a Sentinel’s hand as he teleports back to base. 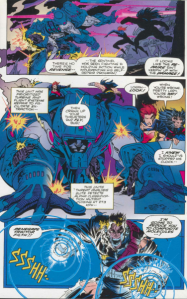 As Apocalypse asks questions about the incident and how it relates to Sinister having passed information to the Human High Council residing in Europe. Ultimately he is confident the human population problem has been dealt with, but refuses to elaborate when asked about it by Sinister’s successor Cyclops.

Back in London, the Human Council, including Boliver Trask, Moira MacTaggart, Brian Braddock, Mariko Yashida and the telepathically neutered Emma Frost talk about how there was no chance of any kind of peace with Apocalypse and now it’s kill or be killed. All this sounds great to Logan, then the words ‘Doomsday Strike’ are used. Before the debate on pre-emptive strikes and genocide can continue, the assassin known as Magma attacks the Council. Before she can do anything, she is stabbed through the back by Logan. This effectively ends the debate and the council authorise a full nuclear strike against America.

Notes: The 90’s were very good to Wolverine. Numerous specials, mini-series and guest appearances made his almost ubiquitous in the Marvel Universe, so it was no different during the Age of Apocalypse. Back in the day and when I started this read through I decided to give each title a fair shake. So despite not being a fan of the Wolverine title with the same creative team, I did get this comic back then. I was swept up in the flash and bang of it all back then, so it was only now that I could look at it more objectively.

The synopsis for this issue is fairly short, which is kind of the problem. Not very much of consequence happens in this issue. The action set-piece is more than a little pointless, the only after effect is the injury to Havok which makes no sense whatsoever. The characterisation is slight, how are these characters different to the 616 versions? We don’t see, we aren’t told. The first issue of any series, mini or otherwise should sell you on the rest of it, there’s nothing here that makes me want to read any more of this. There’s also more than the necessary tie ins to other titles, including Factor-X and Amazing X-Men, which costs this issue the opportunity to stand on it’s own, but to be honest, it would struggle if it did.

Art: 3 out of 5 Adam Kubert is not the best artist for this series, but his visuals are interesting and conveys emotion very well. This series needs a lot of flash, Kubert is good at that, so it barely scrapes by on that.

Writing: 1 out of 5 Larry Hama has had a long career and has written some good comics, but this wasn’t one of those. The characterisation is thin and the plot not much thicker. There’s the action beat, then two conversations and that’s it, I’m not rooting for anyone, nor am I invested in any of the conflicts.

Overall: 4 out of 10 This should be one of the pillars of this crossover, with fan favourite characters and ties to other books, but nothing really happens and the little that does is kind of boring. Near the end a bad guy is skewered in a very visceral panel, boredom shouldn’t be a problem here.

Next Time: Web of Life part 2 and the hunt is on.