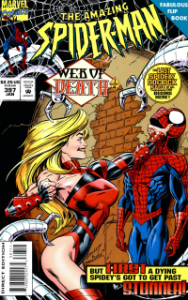 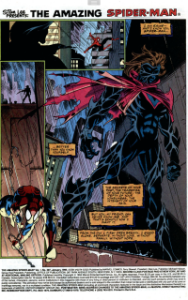 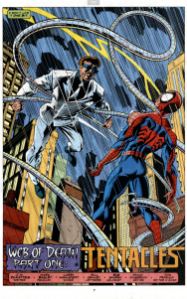 Plot: Peter Parker is dying, he swings through the city, watched by the mysterious Kaine and starts having memory flashes, memories he shouldn’t have, memories that don’t appear to be him. He stops on a nearby roof, but collapses due to the fever he is currently running. He is found by Doctor Octopus. Otto is sad to see the state of his former foe. Rather than end Spider-Man’s life without his knowledge, Otto simply leaves. Shortly after, Spider-Man gets back up, aware that he has somewhere to go.

Elsewhere in the city, at a bar called Lucky’s, Stunner walks in looking for men to try their luck with her. When no one seems man enough to try to woo the statuesque beauty, she destroys the bar, leaving only the bar’s owner standing. He raises a shotgun after her, only to be warned off by an arriving Doctor Octopus. Later at home, Stunner is feeling amorous, but Otto is still dwelling on his former adversary. Otto feels the real person under the arms is slipping away, he is losing his humanity, but Stunner informs him that his humanity is still very much there and it’s what attracts her to him. She then seems to disappear, leaving Otto quite distraught. As one lady departs, another returns as Mary-Jane arrives at her and Peter’s home, it’s a mess, but after a long trip, she simply goes to bed.

Outside, Peter is also heading home, but is still having memories that would seem to belong to a clone, they are so intense, that they cause him to fall from his webline. He’s prevented from becoming street art by Stunner who punches him across several buildings. She banters with him, clearly having a ball, whilst all he can see is the pain the costumed life causes. He is trying to embrace a life that is slipping away and she is simply having fun. In the condition he is in, he is no match for Stunner who is able to land a knockout punch. This convinces Otto (who planned it all) that there is something seriously wrong with Spider-Man and he is going to find out what it is.

Notes: After the damp squib that was Back from the Edge, this story Web of Death has a really solid start. At this time in the Spider-titles, there wasn’t a more capable creative team than Mark Bagley and J M DeMatteis. Bagley did super heroics better than almost anyone and his run on Amazing Spider-Man was a high point in his long career. His Spider-Man is muscular, but does stuff with poses that defy explanation. Stunner is a very 90’s character, but not at the near self-parody level that many different 90’s female characters did. She does play the overly sexualised objectified character, but is huge and muscular also and not playing a subservient role to the clearly more experienced Doctor Octopus. I like the Otto Octavius we see here, we see a nuanced and melancholy character, tiring of his role in the great game. He is genuinely fond of Spider-Man and feels a real sense of loss at seeing Spider-Man fall from the heights of cheerful heroism that was Spider-Man’s trademark.

Despite there being a couple of action set pieces here, this is really a story full of quiet character moments, chock full of subplots. We have the idea that Spider-Man wants the life that he is losing back, this is mirrored by Mary Jane trying to rebuild her home and her marriage. We have Kaine watched both Ben and Peter, feeling different about each of them, without you ever learning what those feelings are really. For me though, the stand out star is Otto Octavius. Dressed in a suit rather than his green and tan tights, he has a dignity and menace that he usually lacks. But rather than play up the menacing villain, we see a man in the midst of a mid-life crisis, torn between his love for this mystery woman and his wistful concern for a man who would happily shove him into a prison cell. These subtleties and contradictions add depth and flavour to this story and elevate it past the mediocrity of Back from the Edge. For the first time since this clone saga started, we are rooting for Peter and in that respect we are just like Otto.

Art: 4 out of 5 – The colours are a bit too busy and the inking is a bit heavy, but it’s hard not to love Bagley’s pencils, which shine in both action and character.

Writing: 5 out of 5 – Emphasising character over plot makes this one of the better written Spider-Man comics I have read for this blog. There’s depth, pathos and at times fun, which really made me enjoy this story.

Overall 9 out of 10- Great art, solid story and a genuinely interesting cliffhanger made this my favourite Spider-Man story so far on the Page of Apocalypse.

Next Time: Back to the Age of Apocalypse and since it’s X-related, we have some Wolverine.