Plot: Colorado, deep in Apocalypse’s America and the kids waiting to become  X-Men are training. Chamber, Husk and Mondo battle one another under the watchful eye of fellow student Know-it-All. They are soon joined by their teachers Colossus and Kitty Pryde who pull no punches. With the aid of Skin, the team are able to hold their own until the clock runs out, they have survived this round.

After this session, the teachers are joined by Magneto, who brings Bishop with him to explain the plot essentially. Bishop is from another timeline, one devoid of the rule of Apocalypse and Magneto plans to restore that timeline, but for that, they need a mutant with time travel abilities. 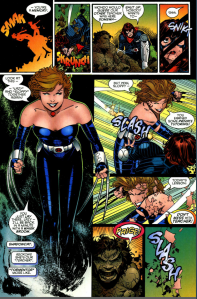 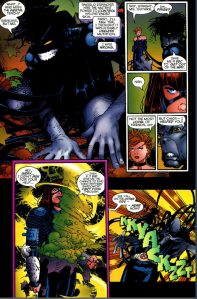 Know-it-All scans Apocalypse’s systems, confirming that all known mutants with Chronological abilities are deceased, but one with the potential has been found, one of the suvivors of the Russian genocides Ilyana Rasputin, Colossus’  long thought dead sister. Know-it-All tracks her to a slave labour camp in Portland. Colossus and his students have a mission, break into Portland Core and  rescue this girl, so she can rescue reality itself.

Notes: Every 10 years or so, Marvel do a teen X-Men book, we’ve had All New X-Men fairly recently, New X-Men: Academy X and the book to start it off New Mutants. In the 90’s it was Generation-X. It weas a book with a couple of familiar characters including Banshee, White Queen and Jubilee, but also boasted new characters, career best dialogue by Scott Lobdell and the game changing art pairing of Chris Bachalo and Mark Buckingham. 5 months in, the comic suffered being folded into Age of Apocalypse, becoming Generation Next while still cementing the look and feel of Generation-X, so this nascent team had to deal with a new cast and new status quo, so how did they do?

They managed it, Mondo, Skin, Husk and Chamber are all back and are both different (Chamber has a face?!) but also recogniseable, even with drastic cosmetic changes these are the characters as you imagine they would be in this dystopia. They are a determined and yet hopeful lot.

Their teachers are less hopeful, perennial sweethearts Katya and Piotr are shown here as jaded and bitter, their lives full of pain and loss, devoid of the warmth and joy that you’d normally associate with them. They pound and slice their students without mercy or restraint as a vicous form of tough love. Magneto brings a mission to them and as soon as Colossus sees it’s his sister, you get the impression his charges no longer seem to matter. In some ways this is the best of the Age of Apocalypse series so far, it’s also the bleakest. Apocalypse’s America is harsh and cruel and no place for compassion or sentiment.

Most of the comic is taken up with introducing the cast and establishing the need to find a time-traveller and it does that, but becomes the least exciting of the series, with the well presented action scenes lacking any stakes, despite their brutality. But after that, nothing really happens and it all feels a little pointless really.

Writing: 2 out of 5 Quippy and fun, the dialogue seems ill-suited for the grim and gritty feel of this story, an attempt perhaps to juxtapose the students and their jaded teachers, bit it doesn’t land and the disconnect sort of drained my enjoyment of this issue.

Art: 4 out of 5 Stylised but visually interesting on every page, this is a comic whose look holds up a lot  better than any of it’s contemporaries. The action is well handled, the character design is excellent and the use of angles and shadows is a lot better than what anyone else at the time was doing.

Overall: 6 out of 10 On a technical basis it’s one of the best comics in the Age of Apocalypse, but it’s dour tone and slow pace really took the shine off what could have been an excellent issue.

Next time: A sort of Kraventakes on a sort of Spider-Man