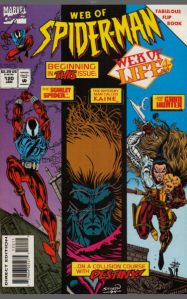 Credits: Written by Terry Kavanagh, art by Steve Butler with Emberlin and Hudson on finishes and edited by Eric Fein.

Plot: Ben Reilly has embraced the role of the Scarlet Spider, if not the name. One night he is on Wall Street preventing Tombstone from robbing an armoured car, before web-slinging over the the river and defending the USS Intrepid from an attack by an A.R.E.S. (Assassinations, Revolutions, Extortion and Sabotage, really that’s their name) faction and all the time he is being watched.

Who is doing the watching you wonder? Well we have competing Daily Bugle reporters Betty Brandt and Ken Ellis, who are both vying for the byline for the story of the attack. Following behind Ben is Vladimir Kravinoff, son of Kraven the Hunter, who is seeking revenge against Spider-Man and is following Ben in a ridiculous case of  mistaken identity. Most motivated of all is the mysterious Kaine, showcasing his obsession with the Scarlet Spider. One thing we learn here is that he is having visions of the murder of Mary Jane Watson Parker by person or persons unknown. 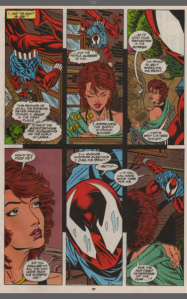 Mary Jane herself is bidding a loving farewell to her sister, after re-establishing their relationship, she realises that it’s time to go home to her husband. I’m guessing that this is setting up the next issue of Amazing Spider-Man, because there’s no reason that this should be part of this comic. Anyway, back to Ben, who is reflecting on his wearing of a costume and how it gives him a sense of purpose, deciding more and more to live this life, despite the fact that in his own mind, he is not a real man. 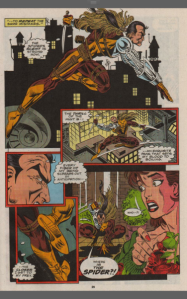 At the USS Intrepid, Kravinoff stalks the scene searching for the scent of Spider-Man, oblivious to the fact that Spider-Man wasn’t ever there, then follows the scent across town after beating the hell out of the Intrepid’s guards.

As the Scarlet Spider, Ben arrives at Betty’s apartment, wanting to talk to a familiar face and maybe get his side of the story across without dealing with Ken Ellis. Betty is a bit gun-shy about being sympathetic, given her recent history. She brushes him off so he leaves, but Kravinoff arrives very soon after only to find he has missed his quarry, but not by much. His quarry however is wondering if he felt sparks at Betty’s. Overall he’s feeling pretty good about his life, blissfully unaware that he is being hunted.

Notes: I am very grateful that this is part one of a story, because it didn’t really feel like a story in and of itself. I am not a big fan of this kind of legacy villain. Kraven the Hunter was a bit of a one-note villain that was in one great story. As good as Kraven’s Last Hunt was, it doesn’t warrant a follow up by a less interesting Kraven copy. But if you are using that character, pitting him against a copy of the other half of Kraven’s last hunt is probably the way to go.

The characters never actually meet in this issue, the tension being ratcheted up as Vladimir Kravinoff closes the gap between him and who he believes is Spider-Man. While we are on that subject, does he not know that it isn’t Spider-Man he’s chasing? He mentions getting reports on the battle at the Intrepid, didn’t they describe the guy in the mask? But that’s beside the point. The action in the Tombstone fight is well handled, with the end of the fight being quite satisfying. That leads into the battle against A.R.E.S.  which I didn’t enjoy as much, but it was somehow needed to set up the other scenes. The introduction of Betty Brandt as a potential love interest feels forced and more than a little creepy. And it’s that kind of thing with this whole issue, once the battle with Tombstone is over, everything else feels forced and contrived. It’s set up for the next part really well, but that’s not what I wanted here, I wanted to read an actually good comic, rather than the set up for another one that I haven’t got yet.

Writing: 2 out of 5 with lack lustre dialogue and a weirdly contrived plot, I found this one of the worst Scarlet Spider appearances so far.

Art: 4 out of 5 Butler is as good as ever, his characters look glamorous and his action scenes work really well. He’s not given much to work with here, but what he is given he does really well with.

Overall: 6 out of 10 Web of Life part 1 should really be a story that has some life in it? I’m really waiting for signs of that life.

Next Time: Web of Death begins as Doctor Octopus makes a comeback.